When we shop, we buy a whole bunch of bananas. Friday morning I walked into the kitchen and noticed a dark puddle under the basket where they were. One at least had split open and was totally liquid and 6 more felt as though they were about to do the same thing. Never known bananas do that before. Had to chuck them out and get some more. Yukky. They replaced the rotten ones for me.

Sunday I watched The Durrell's in Corfu and Poldark. First time I watched the Durrell's I didn't think much of it but it has grown on me.

Fingers crossed we will get our balcony door unlocked this week. Also that they will do the windows again but I am not holding out much hope for that.

Having bought a red cabbage on Tuesday, I decided to cook some of it on Saturday. I was making Pork Tenderloin Diablo which I posted a while back and decided this would go well. What I didn't realise was how difficult the red cabbage would be to cut into. I ended up cutting slices off the whole and then chopping them to size. The end result was, however, delicious. I did not, of course, use a whole head of cabbage. I used about a quarter and that was more than enough for us for two meals. 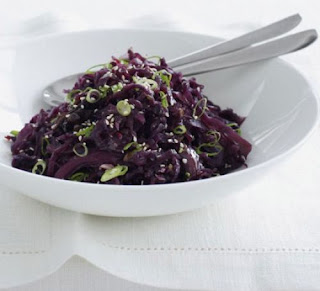 1. Tip all the ingredients, except the spring onions, sesame seeds and oil, into a large pan with a lid, and bring to a simmer. Cook over a low heat for 25-30 mins until all the liquid has evaporated and continue to cook, stirring regularly, until the juices become really sticky and glaze the cabbage.