Our principal activity for Wednesday was going to the doctor's. Matt needed his skin cancer checked and I had X-rays on my back to talk about. However, I also asked her about Matt's dizziness and told her of him falling twice in the last couple of weeks. Said I had checked blood pressure and blood sugars but she decided he needed to go on a BP halter for a while to see what was happening. As for me, she wanted me to go for an MRI to see if I needed an operation on my back for a stenosis or something.  I basically said no thanks. It would cause unending complications in our lives for me to go into hospital for back surgery.

After that, went to the bowling alley for a couple of games. I won one and Matt the other. Bit of shopping, visit to the library and back home. Met a guy in the lobby who knows everything and he told me that they would do another cleaning job on our windows and that I should look for the guy in the Yellow Vest as he was the one who unlocked the windows. Inspector I presume. He also told me the construction guys are supposed to be out of here by next Wednesday. We shall see whether he really does know everything. Forgot to mention, I had gone down to exercise class first but we got a message that an emergency had occurred and there would be no class. No idea what that was about.

Started watching Killer Hurricanes but didn't find it nearly as interesting as the Killer Floods programme last week. Way too many charts and statistics. But it does seem that way back when, there were storms far worse than anything we have experienced in modern times although with global warming, etc. it may be that the severity will increase. Glad I live where I live.

Talking to Stephen Tremp yesterday, I promised to find the recipe for crab cakes which I got from the Beaufort Maritime Museum in North Carolina. I always liked these because they really tasted of crab. I haven't made them since I left NC though. My access to crab is limited to canned and it isn't that 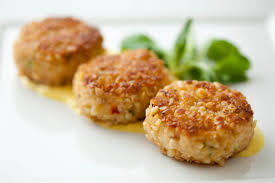 flavourful anyway. Well I guess living on the coast we got spoiled. It occurs to me that one could use Panko instead of the breadcrumbs. I just double checked, the ones from the other day were not vastly different but did contain green peppers which would really affect the flavour, personally I want to taste the crab. JoAnne was one of the people running  the class which a friend and I went to. Lasted a few weeks I recall.

Melt margarine in  fry pan. Mix crab meat with seasonings, eggs and mayonnaise. Add bread crumbs to thicken to a soft moulding consistency. Spoon in to pan and sauté until lightly browned on both sides. Drain on paper towels. Serve.