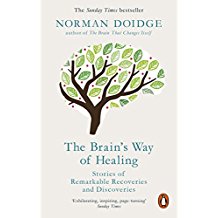 I have just been watching an incredible programme by a Toronto Doctor, Dr. Norman Doidge, who was basically saying the brain is not a machine and it is NOT hardwired but it can heal itself and it is possible to stimulate such healing. There are now many people in the field and they have done a lot of work with autistic kids and there were several cases when we saw the child when autism was at its worst and then watched some of the treatments and later saw the older version of the same child with incredible differences. This neuro plasticity of the brain can be stimulated by many things which was explained during the programme. But, and this is the thing which most interested me, they consider stimulating such neuro plasticity will help dementia and Alzheimer's. Dr. Doidge has written two books, The Brain's Way of Healing and the Brain that Changes Itself, one of which I have ordered from the library in ebook form (only one they have). It seems to me that it is necessary to work with a doctor/therapist who will assist in making the patients interested in the necessary steps to heal themselves. Diet and exercise are necessary adjuncts too. Particularly the foods of the Orient as opposed to the foods we stuff ourselves with in the west. I am hoping Birgit of BB Creations managed to catch the programme as well.

Being particularly stupid, I went to exercise class this afternoon, 45 minutes, and then went bowling for an hour or two. My legs were a tad tired at the end of this. However, Matt won't come to exercise class (which, I might add, is free) so I feel the more often we can go bowling, the better it is.

Can't believe it's the first of December tomorrow. This year really seems to have shot by. I have been told that the balcony workers will be out of here by the end of the week (never to come back as far as I know) but our balcony door is still firmly shut. Are we going to get it opened this week? I sincerely hope so as I will be an extremely unhappy camper if we don't.

Seems like now I have decided to make more use of Turmeric, so has everyone else.

Tumeric is the trending seasoning of the year. Its subtle flavor notes bring out the best in this simple pork chop recipe. We love that the side dish recipe allows you to dress up precooked brown rice by adding fresh lime juice and cilantro. You'll love the pork chop, but it may be the rice side dish that you make again and again, as it pairs perfectly with a variety of dishes, ranging from Spanish to Asian.
Opt for bone-in pork chops for this recipe to get the full depth of flavor the recipe promises. 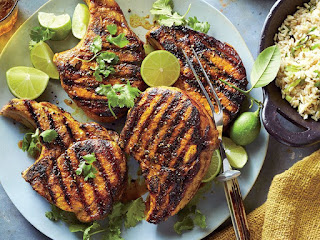