On Sunday night I read an interesting article about coloured vegetables - apparently the colours do make a difference. Some vegetable contain more vitamin A because of their colour, some contain different antioxidants - I have decided, after reading the article, that I am going to buy more red cabbage for instance. Both cabbages have lots of antioxidants and are high in Vitamin C  but red cabbage has one and a half times more potassium than green. Do read the article, it is interesting how different coloured foods are better for certain things than others. It covers tomatoes, beets, peppers, cauliflower, beets, cabbage, potatoes, squashes - all I can remember. Of course it mentions purple potatoes which we saw here for a while but they seem to have disappeared. As for coloured cauliflower, I have never tried them. I naively assumed they were probably all the same.

I can't remember if I wrote about our hairdressing salon a while back. They suddenly changed hands and their prices increased slightly. However, there was a notice on the door saying closed for renovations and they have been closed ever since. Matt has been a couple of times to another place in the area and paid roughly the same, but when I asked about getting my hair cut they wanted $25 plus tax. To me that is a bit pricey. So, I started calling around. I got quotes going up to $40 just to cut my hair!!! No way thank you. However, there was a notice in our mail room lately for an in house hairdresser called Klaus Kuts. Oddly enough Klaus was the name of the guy who used to cut Matt's hair. So, at the end of my tether, as it were, and envisioning having to cut my own hair again (I did so for years) I called Klaus Kuts and asked about cutting my hair, he put his wife on the line who immediately said "I know that voice". It is the couple who owned the salon we have been going to for years. She is no longer doing hair but said as I was in the building she would cut mine for me. I couldn't believe they had moved here. She will charge me the same as she always did $15. Whoopee. So this morning I will finally get my ears lowered LOL. I don't understand why some of these salons want to charge so much for a straightforward cut. One woman said wash and cut I responded I don't want a wash, she said she always washed first. I know people pay phenomenal amounts for perms and die jobs etc. But 40 bucks for a simple cut!!!

I did not bowl well on Monday nor did Matt so the team ended up with 3 of the 7 points. Next time I hope.

I went to the drug store this afternoon on the way home and saw they had "broaches" for sale. Later I had an email from Costco which had an ad showing their price "beets" other prices. I can't believe it, I really can't. In the drug store I wanted to stop and change it but didn't. Are people really so pig ignorant or what?

This looks delicious but I have a confession to make, I buy crab cakes from my grocery store which are great, so I would probably just make the Rémoulade sauce. Admittedly mine won't have the crispy Panko breadcrumbs on them.

This 20-minute meal feels restaurant-worthy, a great way to get more seafood into your weeknight rotation. Readers loved the lightness and tenderness of the cakes; we achieved this by using panko—supercrisp Japanese breadcrumbs—and keeping binders to a minimum so the crab shines through. Look for fresh lump crab in containers at the fish counter rather than using canned. If you want even more kick in your sauce, use spicy, grainy Creole mustard. Serve the cakes with a simple salad of 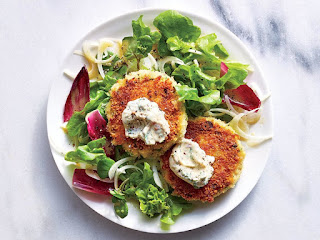