I said to a friend that I had never had a real tree but thinking about it, I must have done as a kid in the 40s and 50s because I don't suppose there were such things as synthetic trees. I have used a synthetic for years but I only just found out that we are not allowed to have a real tree in this apartment building. Just as well I do, I never knew there was a rule about it. So, ours is now up and decorated and lots of other stuff is spread around but what a lot of work. Every year we swear we won't bother next year and then when it comes down to it, we kill ourselves decorating once more. I haven't totally finished, had enough for one day.

Of course this is Monday's blog so we will be off to the bowling alley. I do hope the rest of our team will be there. Never found out what happened last week. I know our team sank quite a bit in the standings. Emailing with a friend in England recently she tells me her husband lawn bowls in summer and one of the most popular games around is 9-pin bowling!!! I had never heard of that but googling I gather it is very popular all over Europe. I thought it was 10 pin there like in the US.  It's popular here too of course but 5 pin is a very Canadian game and, IMHOP, much better.

We enjoyed the Pho so much the other week that we decided I should make it again soon although I have just remembered we are going to the Mandarin on Tuesday. So it won't be at the beginning of this week. I want to get into Costco soon too, need a couple of things. It's close by the Mandarin so maybe we'll go then. I complained before about having to walk so far to the meat counters. Then we go regular grocery shopping on Tuesday afternoon anyway. Oh well, I'll live I think.

Forgot, Tuesday Matt will be delighted to get rid of his Cardiac Event Monitor which keeps falling off his belt, especially when bowling. He has been keeping it in his pocket which seems to work a bit better but he will be so glad not to have to wear it any more.

Not sure of the origin of this recipe but it is in my recipe programme. I chose a picture which I figured looked like the salad although I don't think there are any tomatoes in it, not sure why not. 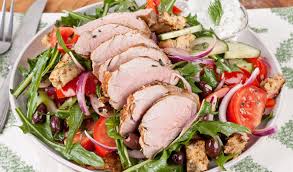 1. Trim fat from pork. Combine oregano, vinegar, oil and garlic in a large ziplock. Add pork, seal bag, marinate in fridge for a minimum of 30 mins, turning in bag occasionally.

2. In a processor put 1/2 cup cucumber, dill and yogurt. Process about 10 secs until smooth, scraping sides of bowl. Set aside.

4. Divide lettuce among 4 plates. Top each with 1/4 of the remaining cucumber, onion and next 6 ingredients (radishes to end). Divide pork evenly. Top each plate with 1/4 of the yogurt dressing. Serve immediately.