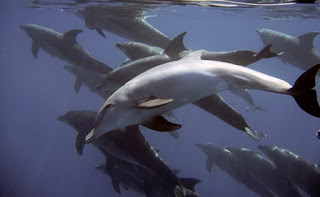 How very sad. I find Alzheimer's is the most pernicious and terrible disease, particularly as there appears to be nothing that can be done. They have now discovered that Dolphins can also get Alzheimer's Disease. I had always believed it was man's curse, but apparently not. Care2 was the first source I read but I later verified it on Google. I have discovered that there are particular areas in India and other parts of the world where they are not prone to the disease and it is attributed to the various herbs and spices they use together with the fact that they eat little or no beef.

Sunday I made Pho Ga which I posted a few days ago. I realised that although it lists peas on the recipe it doesn't tell you what to do with them. I added them at the same time as the carrots. I was assured it was both different and delicious. Matt has never eaten Pho in a Vietnamese restaurant. I have always been put off making it before because of the "boiling beef bones" part prior to doing the rest. The Campbell's carton of Pho makes an excellent start to the dish. One thing I personally found, the raw carrot shavings were a tad tough for me although Matt didn't find them so. Also, the rice noodles said pour hot water from the tap and soak for 25-30 minutes. The hot water from our taps is almost boiling, but they were slightly soft but not enough so I shoved them in the microwave, water and all for 4 minutes total and they came out perfect.

More odd weather on Sunday, we had snow flakes for a while, but they were coming down so slowly you could count them. They never settled on the ground, not enough of them.

I just came across this recipe in my cookbook software. As an Englishwoman I have made many Yorkshire Puddings or what North America calls Popovers, but never with cheese. They sound pretty good. 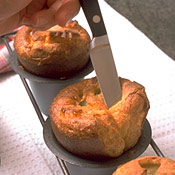 Popovers and blue cheese are naturals in their own right with beef, but when combined into one, the results are incredible. This recipe is not complicated but it must be made and served at the last minute to ensure the best results. If you are not a fan of blue cheese, try using a crumbly goat cheese in its place.

2. In a small saucepan, warm the milk and cheese over medium-low heat until the cheese is melted. Remove from the heat and whisk in the salt and pepper. (You can also melt the cheese in the milk in a glass measuring cup in the microwave on low power for 1 min.)

3. Put the flour in a medium bowl. Whisk in the milk mixture until just combined; it's fine if the batter is a bit lumpy. Add the eggs one at a time to the batter, whisking well after each addition. Pour the batter into the prepared tins and bake on the lowest shelf for 20 min. at 400 degrees F. Don't open the oven, but reduce the temperature to 350 ddegrees F and continue to bake another 15 min. until the popovers are browned and fully puffed. Remove the popovers from the oven and immediately take them out of the tin to keep them from getting soggy. Poke each popover with a knife to release steam. Serve immediately or reheat just before serving.