Wednesday we went to the bowling alley for our lunch and played one game but I was not feeling 100% so we came home early. IBS playing me up. Then I really didn't feel like writing a blog as I had little or nothing to talk about. I stretched out in my lounger and felt sorry for myself LOL.

Thursday I made some Picadillo for supper and then we went bowling. I had two excellent games and one reasonable. Matt was the same. No pressure I guess. The Picadillo, which we ate in the evening, was very good. First time I have ever made it. Matt always did so before.

I bought a DVD of Dunkirk which I thought was the movie but turned out to be BBC programmes as it turns out, the two episodes we watched were excellent. A lot of people probably don't realise it is only 22 miles across the Channel from Dover to Calais. The channel is wider in some places of course, but it isn't very far which is why a number of small yachts were able to cross to Dunkirk to help with the evacuation of the BEF. (British Expeditionary Force). My history of that time isn't very good, but certainly England was not prepared for war, Prime Minister Baldwin having tried everything he could to not get into a war, they didn't do anything much about arming and training British soldiers. In fact Baldwin and his faction didn't/wouldn't believe Germany was rearming.

I just came across this recipe tonight, one I saved a while back and which I intended to try but have never done so. I save so many recipes and sometimes I forget that I have done so. 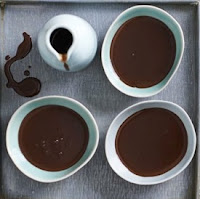 1. Put the cream in a saucepan over a medium heat and gently bring to the boil. Meanwhile, chop the chocolate into small pieces using a heavy knife and prepare the coffee.

2. Once the cream is just boiling, turn off the heat and throw in the chopped chocolate. Stir gently until completely smooth, then add the coffee and brandy (if using).

3. To serve, divide between 4 small bowls and add a scoop of vanilla ice cream to each.