As most of you will know by now, we lost our bowling tournament by 1 point. Unfortunately we were playing one of the best teams and the team which beat us had a walkover due to absent players who didn't bowl ahead. Tees me off a bit. Still, what can you do. I could have borne it more easily if we had lost by lots of points. Next week is our final banquet for the summer league plus prizes which we now won't get, boo hoo. Don't get anything for second place unfortunately. Matt and I both had excellent games in the first of the three. After that, I couldn't bowl worth a damn, I didn't even make 100 in the second game. Pitiful.

We had an absolutely gorgeous bout of drilling today, not sure which was worse, when they were drilling our balcony floor or when they were doing the one above us. It was far worse than when they were getting rid of the wall. Matt and I were shouting directly into one another's ears in order to communicate. It's bad but although we weren't sorry to go bowling, it really isn't so bad it drives us out. To hear other people complaining, it's terrible and yet we find it really bad but not so bad it drives us out of our home.

Flavorful, light, and super easy to make, this healthy Lomo Saltado Recipe is a treat for the eyes as well as the palate. Traditionally served with fries or potatoes, my skinny version eliminates them to 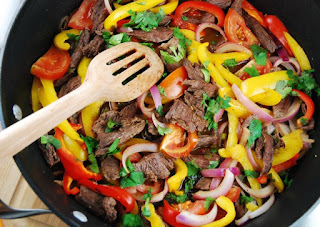 save on Points Plus, but is just as delicious.

2. Add beef and cook until browned on both sides, about 2 minutes per side. Add in garlic, onions and peppers, and cook for another 3-4 minutes.