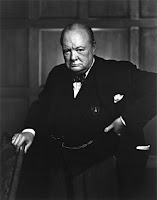 Just watched an excellent Masterpiece Theatre presentation, Churchill's Secret. It was about him having a stroke in 1953 and it was kept secret. It was very well done. I have a vague memory of having seen it before, if so, not sure why I didn't remember it more. I must say, I didn't know he had had a stroke at that time but then I would have been about 15 at the time I think. He didn't actually die until he was 90. He was an amazing man and the best leader we could have had during the war. We have another movie The Gathering Storm about his years leading up to World War II when he was one of the few who realised what Hitler and the Nazis were up to and tried to persuade Baldwin, the then Prime Minister to build up the British war machine.

So, it didn't finish til late and I am now about ready to hit the sack. Matt already has. Tomorrow we are going bowling at the other bowling alley, Victoria Lanes. We called in at our usual alley, Towne Bowl, and collected our shoes and bowling balls. Missed the owner. But boy are they stripping down the lanes right to the bare wood. Place is not scheduled to reopen til Sept. 1st. So I guess we will be bowling at Victoria next week too.

They dismantled the gantry outside our window today so now we have to wait for them to fill in the holes where it was attached to the balcony. They they have to paint it and after that we will get the railings, we hope. However, there are at least 57 railings to be put up yet and some which haven't been completed, so.......

This looks like a good salmon recipe. Unfortunately I don't think Becel margarine is available in the States or even outside Canada. At least, never saw it in NC. It is a very healthy margarine. Obviously you can sub with whatever is available to you. 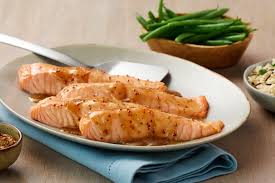 3. Bake until salmon flakes with a fork, about 12 minutes. Serve, if desired, with hot rice and vegetables.

4. To cook on the grill, arrange salmon in center of doubled 18 x 18-in. (46 x 46-cm.) piece heavy-duty aluminum foil, then top with mustard sauce. Wrap foil loosely around salmon, sealing edges airtight with double fold. Arrange packet on grill and cook until salmon flakes with a fork, about 12 minutes.