Monday morning we both had a doctor's appointment and then I finally managed to get round to going to apply for my new health card. Last time we went there was a huge line up. There was again but we had more time and in fact I was in and out in half an hour not too bad. However, it is going to take 6 to 8 weeks for the card to arrive. I wonder what takes them so long?  They insist you remove your glasses when you have your picture taken and they also do not allow you to smile. The result, an awful picture. I thought I had to pay for a new card but luckily I was wrong. Have to pay for a driver's license though. Mine, which was recently renewed, expires when I hit the big 80 and then I have to go for a new license every two years. Matt has now done this twice. The cards for both health and driving are useful for ID.

Tonight we are going to the Red Lobster with a friend. She and I are both crab fanatics and as Crabfest doesn't end til August 31, we will take advantage of it. However, she has a very small appetite so I don't suppose she will have the Dueling Crabs which I found so delicious last time and which I will probably choose again. The dish is part Snow Crab and part Dungeness if you don't remember. This time I will take my lobster pick with me, they give you some tools but this gets right down inside a leg to draw out the flesh. Having written this I got out my pick and had to clean it in the silver dip as it was a tad tarnished. I don't get to eat lobster very much after all.

We passed the Korean store this morning and I thought about stopping but wanted to get to the Service Ontario Office to get my card. Will have to plan to get there soon.

For this recipe you would probably need to have a Korean store in your area, luckily I do. I love recipes for skirt and flank steak as these meats are flavourful and inexpensive.

Skirt steak is the ultimate summer steak for grilling—quick cooking, buttery, and versatile. 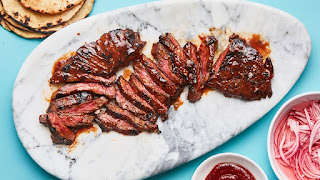 1. Combine 3 Tbsp. gochujang, 3 Tbsp. oil, and 3 Tbsp. vinegar in a large resealable plastic bag. Throw in several generous pinches of salt and grate in half of onion on the large holes of a box grater. Add steak and seal bag, pressing out air, then rub steak to coat; chill at least 30 minutes and up to 12 hours.

2. Meanwhile, thinly slice remaining half of onion and combine in a large bowl with remaining ½ cup vinegar and a pinch of salt. Let sit until onion is softened, at least 30 minutes and up to 2 hours; drain.

3. Prepare a grill for medium-high heat; oil grate. Remove steak from bag, letting excess marinade drip off; discard marinade. Grill, turning once or twice, until lightly charred on the outside and medium-rare in the thickest part, 4–6 minutes, depending on the thickness of the meat. Transfer to a cutting board and let rest 10 minutes before thinly slicing against the grain.