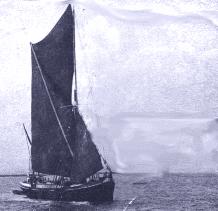 Just been watching a series of English programmes called Shoreline Detectives. Pretty interesting, but part of the programmes featured a graveyard of Thames Sailing Barges which made me feel very sad because many years ago I used to live on a Thames Barge. After the second world war, my father bought a Thames Barge named Iota, from a company which was converting them into habitable living vessels. Iota had fitted carpets and every mod con which was available at the time. Including a propane operated fridge which was constantly going out due to the movement of the vessel. My father sailed Iota to France, Belgium and Holland although they were actually designed for the coastal and shallow river waters of the British Isles. They were cargo vessels and transported things like bricks, straw, coal, etc. bringing much of that into London from other parts of the UK. When operating commercially they were sailed by a man and a boy although in one case a man and his wife who spent their whole married life working a barge. It was sad to see the rotting hulks of the barges in the mud of an Essex shore. I know, in fact, that Iota too has been left to rot and yet there are still a number of barges which have been restored by enthusiasts and are still being sailed. Years ago they used to have a Thames Barge race, don't know if they still do. My father entered Iota at least once that I remember. This has filled me with lots of nostalgia tonight.

I thought this looked very tempting.

This marinade recipe works with any other quick-cooking shellfish or seafood—try scallops or squid. Just be sure to stick to the 30-minute marinade in any case, since going longer can toughen the flesh. 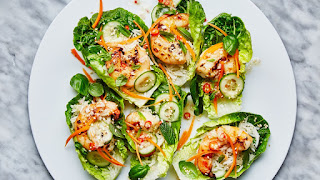 1. Whisk shallot, lemongrass, chile, lime juice, orange juice, ginger, and salt in a small bowl. Reserve half of marinade for serving; cover and leave at room temperature until ready to use. Pour remaining marinade over shrimp in a medium bowl and toss to coat. Cover and chill 30 minutes.

2. Prepare a grill for medium-high heat. Grill shrimp until lightly charred and cooked through, 1–2 minutes per side. Transfer shrimp to a large bowl and toss with sesame oil; season with salt, if needed.