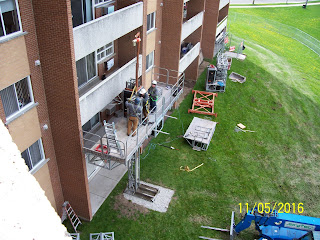 Monday morning I got the notice saying that we had to have our balcony cleared by Wednesday August 2. I figured that. However, what I didn't like is the Asst. Super who has been involved in the balcony work on behalf of the landlords, said he hoped they would get it done before the winter. I hope so too. I would go crazy if we couldn't use our balcony until next year. It's going to be bad enough as it is. Monday afternoon I went down to exercise class (I remembered this week) and we were all talking about the work. Apart from the ones which were totally finished last year,  there are a lot of balconies which are basically complete but don't have walls. People were talking witholding rent, I was previously thinking reducing what we are paying. If it happens that is. This photo, from last year, shows just about where we are at. They will be building the scaffolding any day now which is what the gravel base is for. All of today they have been carrying all their stuff round to this side

Today we are going Mandarinning again!! Sadly they stopped serving chocolate bacon yesterday, I had been hoping to go with our friends last week but they couldn't make it. Guess we could have gone on our own. Maybe I should try making chocolate bacon myself. We had a fill in teacher at class Monday, she was saying she had spent the weekend pickling beets and canning tomatoes. I was going to give her this blog address but forgot about it at the end.

Eating Well have a diet plan - well in fact they have several which are based on a calorie count. This recipe is one of the things they suggest for supper on one of the days. I thought it looked good. These peppers are actually 401 calories per serving.

Aromatic savory-and-sweet stuffed peppers are a satisfying supper, thanks to lean beef, brown rice and bell pepper in each bite. Serve with rainbow chard sautéed with olive oil, garlic and parsley. 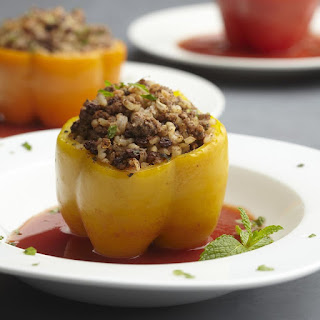 1. Heat rice according to package directions. (If using cooked rice, skip to Step 2.) Place peppers upside-down in a microwave-safe round casserole dish just large enough to fit them. Add ½ inch water to the dish and cover with a lid or inverted dinner plate. Microwave on High until the peppers are tender but still hold their shape, 3 to 6 minutes. Drain the water and turn the peppers right-side up. Meanwhile, cook beef and garlic in a large nonstick skillet over medium-high heat, breaking up the beef with a wooden spoon, until no longer pink, 4 to 6 minutes. Stir in currants, cumin and cinnamon; cook for 1 minute. Stir in the rice and cook for 30 seconds more. Remove from the heat and stir in ½ cup vegetable juice, cup mint, orange zest, salt and pepper. Spoon the beef mixture into the peppers. Pour the remaining 2 cups vegetable juice into the dish and cover. Microwave on High until the juice and filling are hot, 2 to 3 minutes. Serve the peppers with the sauce; garnish with mint, if desired.