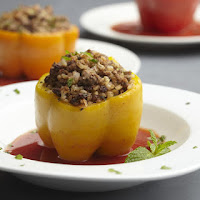 When we went shopping a couple of weeks ago, I bought some Basmati rice. Wasn't until I got home and was pouring it into the storage jar I use for rice that I realised it was brown Basmati. I didn't even know there was such a thing. Fast forward to Thursday morning and I am trying to make Moroccan Style Stuffed Peppers and the rice is taking forever to cook. I have thrown the rest of it away, a waste, but I can't handle this, I Googled and it said something like 50 minutes. That's ridiculous. White Basmati takes 25 and that is bad enough. Obviously I will be more careful next time I shop for rice. Eventually the rice did cook and I'm not sure but I think it did take about 50 minutes in total. I finally finished making the peppers and later on we had them for supper. They were delicious. I might say, on the way back from bowling, we stopped in at the store and bought some regular Basmati rice. I forgot to mention that having let the peppers grow cold, I looked up the best way to reheat. One instruction I read stipulated that microwaves would present a limp pepper and that baking  them in the oven was the best way to reheat. I ended up putting them in the oven, covered, and baking at 350°F for about 45 minutes. That worked well. We now have two left over for maybe Sunday evening.

Yesterday, August 2, was Earth Overshoot Day "If nature was run like a bank account, we’d all expect to be told when there was nothing left to take. 2 August is when we, humanity, get that ‘official’ warning from the ‘Bank of Nature’.It’s called Earth Overshoot Day.

The Earth provides us with vital things like freshwater, food and air — and, up to a certain point, it has an amazing capacity to regenerate. But we can’t keep taking and expect the Earth to cope.
Earth Overshoot Day marks the moment when we have taken as much as the planet can sustain in the current calendar year".  This is not very good news for us. I have included a link to the World Wildlife blog talking about this Overshoot.

We had some drilling today from the workers, but only for them to fix the braces on each balcony they were using. How long before they actually start drilling out the concrete, we don't know. Dreading it.

This sounds delicious for the summer. 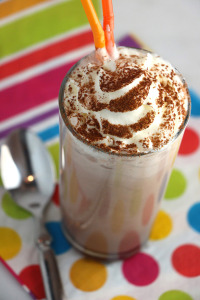 1. Add all ingredients to a blender and use "ice" setting to crush and mix into a creamy shake. Top with whipped cream and a dusting of cocoa or cinnamon or both!