Funny, I heard a song on the radio this morning which drove me up the wall "I don't know nothing" and it was repeated lots of times. I emailed the DJ whom I know from various recipe broadcasts I have done for him, and he said if bad grammar in songs was going to worry me, I would be in a world of hurt. Suggested I stick to orchestral pieces and then played Albatross on the radio for me. It is true, there is lots of bad grammar in songs but this one particularly hit me today as it was so often repeated during the song. Albatross is by Fleetwood Mac and I first came across it when I met Matt over 45 years ago, he had ordered it from a music store and just got it when I first met him.

I just watched two fascinating programmes on PBS. One about solar eclipses which covered how man finally learned how to predict when and where they would happen, and explained the importance of the sun's corona which is hotter than the sun itself (they don't know why) and sends out bursts of energy which can adversely affect earth. The second programme was about the Voyagers 1 and 2. Considering the time this programme was initiated and how little computer ability was available, it was a remarkable achievement. The computers of the day were about as strong as the buzzer on our key chains. The two Voyagers are now out in space way out of our solar system  having examined several worlds on the way to outer space. An incredible feat of science. The Voyagers will last longer than earth is predicted to do. The records they carry will last for billions of years. Would be nice to think there really was someone out there and that they would pick up these messages from Earth.

Much to our disappointment, the work at our bowling alley will not be finished until next week so we may not be able to bowl there until September. However, we are planning to go to Victoria Bowl which is 'just up the road' from us.

I have been using baby Bok Choy quite a lot lately and really enjoy it. This is a very simple recipe which I found at Bon Appétit.

This bok choy recipe is flavored with garlic and soy sauce. 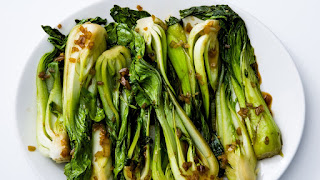 1. Heat oil in a large skillet or wok over medium-high heat. Add garlic and shallot and cook, stirring, until fragrant, about 30 seconds. Add bok choy, soy sauce, and 2 Tbsp. water and cover immediately. Cook 1 minute. Uncover and toss, then cover and cook until bok choy is tender at the core, about 3 more minutes.