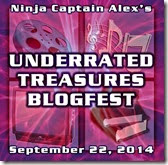 Alex J. Cavenaugh is hosting The Underrated Treasures Blogfest today. At first I thought I didn’t have anything to talk about but then I remembered a film I saw as a child. 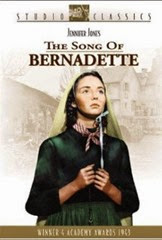 I don’t know how old I was when I saw this film, but I wasn’t more than around 7 I think. The film was made in 1943 and at one point I was attending a convent school and they took us to see this movie. The Song of Bernadette which is the story of Bernadette Soubirous who had visions of Mary, Mother of God and who was instrumental in uncovering the waters of Lourdes which have healing properties. Wikipedia have the full story of the film here. The film has stayed vividly in my mind ever since for close on 70 years. It really made an impression on me. I have never heard of anyone else seeing it nor have I heard/read the film being mentioned anywhere but, to me, at the time, it was an absolutely wonderful movie. By the way, I am not a Roman Catholic but as a child during the war, moving around with my parents, my father being in the RAF and posted to different stations throughout England, I went to whatever local school was available. This included two convents and 8 other schools.

As for an underappreciated book, I have to choose Havenstar by Glenda Larke. I love all of Glenda’s books but this, her first, is the one I have read several times and never fail to enjoy it. Glenda’s books are set in the most incredible worlds which she builds beautifully and sets the scene for different kinds of magic. The Havenstar world is set in a restricted environment where Kerris, the daughter of a brilliant mapmaker, is not allowed to follow in his footsteps because she is a girl although she has been doing most of her father’s work, behind the scenes, for years. She is betrayed by her brother and forced to flee into the Unstable which is an absolutely fascinating and dangerous place where anything can happen. When Glenda first published this book it was in her married name, Glenda Noramly, and then shortly after, the publisher went under. It has now been reissued in digital, paper and hard back. Glenda has a blog at Tropic Temper which is where I first discovered her quite a number of years ago.

How about an under appreciated food. The traditional Steak and Kidney Pudding. I used to make these a lot many years ago, but now avoid the pudding part because it is very bad for dieting. The author of this recipe is right, it is very different and I am not sure I approve of the untraditional way she has altered it even though it does sound pretty tasty. 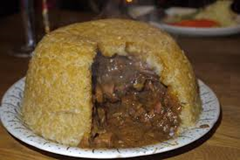 No other British dish shows the British idiosyncrasy of calling a savory dish a pudding than Steak and Kidney Pudding. A Steak and Kidney Pudding recipe may at first look a little daunting, but don’t be put off, it is actually quite straightforward and all the efforts are well worth it.
This is my version and slightly more elaborate than my grandmother made, not sure she would approve of using red wine, but I love it.
Do not confuse this 'pudding with a Steak and Kidney Pie, this is something completely different.

Preheat the oven to 350° F/180° C/Gas 4 Beware, Steak and Kidney pudding is a very filling dish but is lovely with mashed potatoes to soak up the rich, sauce and fresh, seasonal vegetables.