Well, here’s an i 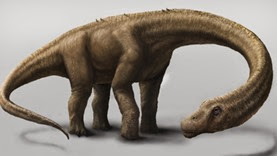 nteresting little lad, Dreadnoughtus, which scientists reckon may be the largest dinosaur found (at least that they can reliably calculate the weight for) there are a couple of others, but there isn’t enough of them to be sure of the weight, Dreadnoughtus they calculate at 59 tonnes. It was found in Argentina and they figure it was vegetarian so would have spent most of its time eating lots of vegetation to satisfy its bulk. It was found in southern Patagonia and is 7 times more massive than the T rex. Matt doesn’t believe they can really figure out the size and weight of these things.

Not having been born and bred on this side of the pond, I/we didn’t

know Joan Rivers that well, but we certainly saw a few programmes with her starring. She was certainly extremely funny and it is sad that she is no longer with us. In this day and age, 81 is actually not that old. I am sure for those of you who saw her a lot she will leave a great big hole behind in your entertainment world.

Another top news story at the moment is the two women who were out kayaking when they were tossed into the water by a great white shark taking a bit at the kayak. They had a cell phone with them and you can hear just how scared they were which is not surprising. I would have been terrified too. They were so lucky the shark didn’t come back again for some reason. One of the two girls said she will never kayak again, the other said she might. With the preponderance of great whites around the coasts this year, you wouldn’t catch me out on the water or swimming in it either. There was a sign written on the beach, “you’re going to need a bigger boat”. I should say so.

Scientists have now discovered that the caffeine in coffee is a genetic quirk and not related to the caffeine in chocolate or tea. But once coffee mutated to have caffeine — not just in the bean, there's even more in the leaves — it turned out to be a good thing for the plant. Bugs don't chew on the coffee plant leaves because they don't like the caffeine, but pollinators like bees do. We couldn’t do without our caffeine hit although I actually drink decaf 90% of the time. Apparently coffee is now under attack by pathogens which are not deterred by caffeine. There is a conference schedule to discuss how to deal with this so the world won't go short of coffee.

This recipe sounded particularly good to me. I have been thinking Chinese a lot lately because the Mandarin (one of our favourites) is advertising the Moon Festival and their special dishes. I particularly love moon cakes. As the Mandarin are giving me a free meal for my birthday we are heading there in a couple of weeks.

This vegetarian version of the classic Chinese stir-fry, Moo Shu, uses already-shredded vegetables to cut down on the prep time. Serve with warm whole-wheat tortillas, Asian hot sauce and extra hoisin if desired.

Instructions
Have a great day