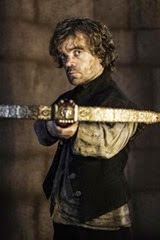 current with them) of A Song of Ice and Fire by George R.R. Martin, I hadn’t watched any of the HBO series, Game of Thrones, on TV. Somehow it didn’t appeal. However, several of my friends said I should watch it and told me how good it was so I borrowed the first two episodes from the local library and watched them on Sunday night. I thoroughly enjoyed them, particularly the character of Tyrian Lannister played by Peter Dinklage who, I think, is brilliant. I have the next two episodes on the way later today. They only give me a week to watch them so I don’t want to order too many DVDs at once just in case. I think once Martin had bumped off most of the Stark family from Winterfell, Tyrion 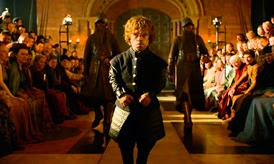 was my favourite character anyway. They stuck pretty well to the books but I did notice a few discrepancies which, considering how many years it is since I read the books, is quite surprising.  Also the events which occurred in different books have been aligned in the same episodes. I’m not quite sure what the timelines would have been originally. Still, all in all, it is very good and I would recommend the programme if you have never watched it.

Here’s a totally new take on French Onion Soup. It sounds delicious and something I just might have a go at for the winter. I’ve left the time in as this might require you to make it over a couple of days if you haven’t time to do it all in one hit. The thing with French Onion Soup, it takes me back to when I was in my late teens, early 20s and we would sail over to Ostend in Belgium where I had a large bunch of friends of my own age. We often ended up in the Kursaal which was both a casino and a night club where we used to dance the night away. Returning home we would often stop in at a late night restaurant for a bowl of delicious French Onion Soup.

Have a great day,