Well, last night I watched episodes 3 and 4. What a waste of time. 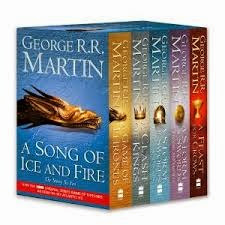 In the first place they had wiped out large chunks of the story between 2 and 3 which I think was a mistake. Having read the books I remembered some of what had happened in this period, but by no means all, if anyone hadn’t read the books, I have no idea how they would have kept up with the story. I found half the time I had no idea who people were and how they had got there in the first place. For instance, Daenerys Targaryen in the previous episodes had a husband and a brother, the series does not explain what happened to them. That is just one glaring example. I still like the actor playing Tyrian Lannister, but how he, the despised dwarf, suddenly becomes the King’s Hand is beyond me. Nor do I have a clue about what else is going on. So, I will not bother to watch any more. However, I still think the books were very good and would recommend them. Although I am not sure George R.R. Martin has yet finished the series. Checking it, he hasn’t. There are two more books planned and he says he doesn’t know when the sixth book will be finished. I am not even going to try reading them again until it’s all completed. He also says he plans to kill off a lot more characters!!! If you are enjoying it, good luck.

As usual we bowled Thursday afternoon, Matt had a good day, I had

a mediocre day. A Portuguese friend was in bowling ahead as she is heading off to Portugal next week for a few weeks vacation, lucky her. She has promised to bring us

some ovos moles again. They are a Portuguese specialty and absolutely delicious. They are made with a thin pastry filled with an egg concoction. If you are interested in the recipe, click on the link above. Not something I personally am ever likely to make despite my liking them so much. When we were in Portugal it staggered me the fantastic egg desserts they made.

I was never a particular friend of grits until I tried Shrimp and Grits which is a big favourite in the south. Here is a different take on that recipe.

Crank up the heat (in your weeknight meal, that is!) and serve a spicy version of this Southern favourite.