Every summer we are plagued by fruit flies which seem to go everywhere, they are not just interested in fruit it seems. Happened to talk about it at the bowling group lunch the other day and someone told me there were fruit fly traps. I have tried trapping them without much success. We shot off to the hardware store on Friday and bought ourselves a trap. At the time of writing this there is still at least one of the little perishers around. I do so hope this works. The thing which looks like a shiny red apple, that’s the trap. Last week I had a cantaloupe hanging around and when we went to cut we discovered they had made big inroads into the fruit, luckily we were able to save the bulk of the melon. They seem to get everywhere, the bathrooms too, what possible interest can they have there? Update, two days later, the little beggars are still around. I’ve even seen them sitting and enjoying life on top of the apple. I guess I kind of expected instantaneous.

October 13 is Thanksgiving in Canada and for the first time in years I am going to have to buy and cook a whole turkey. We always brought turkey breasts back from North Carolina, but of course didn’t go this year. I have forgotten how to cook a whole bird, not that I’ve done if very often anyway. For years my mother always cooked them and she did the same when she visited us in Canada which she did every year whilst she was alive. Practically ever since, it has been a turkey breast which is very easy to cook. (Actually thinking more about it, I did cook a few whole turkeys when in NC). Then I have to worry about

stuffing, I am not that keen on it although I love chestnut stuffing in the neck. Never heard of chestnut stuffing? I guess I will have to post a recipe. Of course I always make bread sauce which I love too. I have posted a recipe for that I know. I was just thinking about Christmas turkeys of old writing this. We always used to have chipolatas with the turkey too. Bit like baby wieners. Not sure why, it was a Christmas tradition. They appeared on the dish wrapped in bacon, surrounding the turkey. Usually the roast potatoes were there as well. Something which doesn’t seem to be served over here. Our roast potatoes are crispy on the outside and fluffy in the middle. 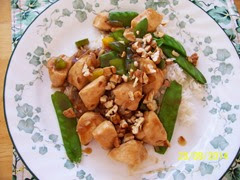 Saturday night I made the Kung Pao Chicken which I posted last week. I made a couple of changes as I didn’t have some things, but it turned out very well and we both enjoyed it. It’s not as colourful in the recipe picture but I didn’t have a red pepper only green and I wasn’t going to make a special journey just for that. Also, I served it over rice, I did think about noodles but chose rice. I don’t know how it compares with that served in a Chinese restaurant because I don’t particularly remember eating it. I will take note in future. This is a lighter version. We drank a bottle of La Vielle Ferme which is a delicious, crisp white wine which we both like very much.

I love Bruschetta (brusketa please) and often make it with tomatoes and garlic, but this one looks good. Any creamy cheese would work, goat cheese comes to mind as I have recently been eating it. This came from Food and Wine.

Peak-season tomatoes make all the difference in this simple bruschetta from author Susan Spungen. They’re the perfect accompaniment to a bowl of soup or a large salad, or, to turn them into two-bite hors d’oeuvres, simply cut the bruschetta 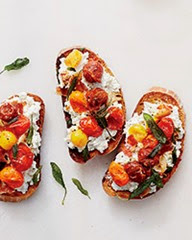 crosswise into strips.
Have a great day