Corn Holding, A to Z. 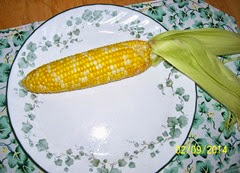 I came up with, what I think, is a good idea yesterday. I maybe behind the fair, but anyway – when I cook corn I first cut off the stalk close to the cob then I microwave it for about 3 minutes with the husk still on. When it comes out the silks come off easily as do the leaves, however, having pulled the leaves back I realised they were cool to handle so I left them as the main way of grasping the corn to eat. Most of the corn holders I have ever had either don’t work very well or fall to pieces easily. I found this worked very well, one barely needs to hold the other end having a firm grasp on the leaves.

The mystery I mentioned yesterday, has still not been solved and looks like it never will be. No bowl of slaw anywhere. It has to have been thrown out but I cannot imagine either of us doing so for any reason.
Just lying down to go to sleep the other night and I started thinking about the A to Z Challenge for 2015, not sure why. I got an idea so had to turn on the light and write it down or I would have forgotten by the morning. So, I’ve even made a start on it, can’t believe it.

I love Kimchi and used to enjoy it a lot when I lived in North Carolina, there were many sources of Korean food in the area. I have written about the Asian shop I found here, but I am sure their Kimchi isn't as hot and spicy as the ones we used to buy. However, when I saw this recipe I thought it would be interesting to try. These are not pancakes like usually served in this part of the world.

Contributed by Joshua Walker
There are countless varieties of the chewy Korean pancakes called jun that can be served as an appetizer or side dish. For this version, chef Joshua Walker flavours the batter with both kimchi liquid and a little pungent black bean sauce. 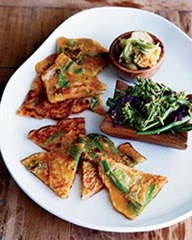