I had a disasterous day bowling yesterday, Matt on the other hand bowled really well. I am not sure, but if seems if I do well he doesn’t and vice versa. It was quite funny one of the owners thought a league started today but they don’t do so til next week and he had made a whole heap of coffee. I made fairly good inroads, but obviously I couldn’t drink it all. One of our Winter League members came in to do a ‘bowl ahead’. She is Portuguese and off to Portugal 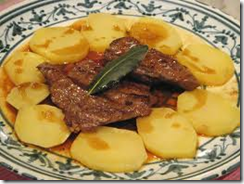 on the 21st. We were saying how much we wished we were going and how much we loved the food. I mentioned we were cooking Iscas this weekend which is a Portuguese liver dish, she had never heard of it so I will take her a copy of the recipe next Monday. Then talking to one of the alley owners who said he didn’t like liver, I assured him I didn’t either, but that I loved Iscas.

So Apple are coming out with a watch?? I would like an iPod or iPad even, but I don’t think I’d want a watch. No doubt they will sell like hot cakes though.

So my favourite mayor, Rob Ford, has been diagnosed as having a tumour. I think he should resign as mayor of Toronto, but even I couldn’t wish him to have cancer despite making a fool of himself and Toronto politics for the world to laugh at.

This sounded an interesting dish for pork tenderloin. I just might use Calvados though (apple brandy) instead of cider. Never been a big fan of cider.