Last night I watched an interesting programme on WNED about Watson the supercomputer which won Jeopardy last year against two top human competitors. It was a fascinating programme. It explained in relatively simple terms just how they built this computer, it took 4 years, and got it to learn so much. It wasn’t sufficient to load the computer with information, which of course they did, but the computer had to learn to extrapolate things from information it was presented such as a Jeopardy question which can sometimes be somewhat abstruse. This computer is able to learn things itself now which is why it beat the two humans. I understand it has since been used in medical situations although the programme was filmed before this happened. However, with its incredible power it can certainly help with diagnostics and many other things which the human brain couldn’t compute in such a short time. Wikpedia describes Watson as a Question Answering machine – their article is interesting to read. To me it is the beginning of the future. All my favourite sci fi books coming to fruition. In fact some of the IBM people working on Watson mentioned Isaac Asimov and his robots. I wonder if humans will ever be able to design robots like those in Asimov’s stories. Although in his Foundation stories, he proved such robots were destructive to human energy and creativeness because we just sat back and let the computers do it.

Hmm, new one on me, they are talking about an Earthquake swarm off the coast of Western Canada. I had never heard the term, but I understand it is a series of

smallish earthquakes which are following closely upon one another. I always thought I wouldn’t want to live in San Francisco or its environs, but I didn’t connect the possibility of the whole west coast being susceptible to quakes. We do get quakes in this part of the world but relatively minor ones which don’t cause much concern. For years people have been talking about the probability of a big quake on the west coast, when I was in San Francisco in 1988 people were talking about the likelihood of it happening in a few weeks time. Made me nervous I must admit. I have a cousin living in that area who has been thrown out of bed a few times and who takes it all in his stride, not me mamma. The map above shows the quakes off Vancouver island.

Here is the latest recipe from Mushrooms Canada. It is a somewhat different one in that it includes salmon. It describes the ingredients for Herbes de Provence, I actually like mine with some lavender added, it gives a wonderful extra dimension. 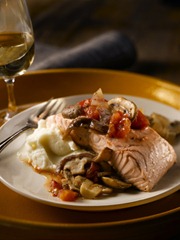 1/4 tsp each salt and pepper

Recipe Adapted from Fanshawe Colleges' entry into the Make it with Mushrooms Student Chef Challenge Fall 2007.