Yesterday I did a guest blog on the A to Z blogspot. Many of you will have read it,  but just in case, I am repeating the two paragraphs at the start of this post, so if you read it yesterday, you can skip it today, I won't be asking questions LOL.

Through Bob Scotney of Bob’s Home for Writing, I have discovered a wonderful 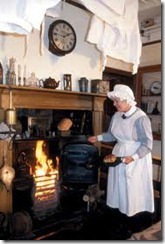 series of videos. Bob was primarily writing about Victorian kitchens, but I was more interested in the cooking as well as the reason for the existence of cookery books such as Mrs. Beeton’s Cookery published in 1935 which I have mentioned many times in my blog. Today when anyone makes something which requires stock, they use a can or a packet of bouillon, most home cooks these days have no idea of how the stock is made in the first place. I too have fallen into this practice, I use age as my excuse, but I suppose time constraints are the principle reason this practice has fallen out of use. This video makes me want to go back to basics, although I probably wouldn’t go so far as using a tammy cloth. This is a link to a fascinating video which is the first of a series on Victorian Kitchens: http://youtu.be/0cfU2k5VsZY

I found this video very exciting and will watch the whole series. My mother was just such a cook as Mrs. Mott although she never worked in the big houses nor did she ever use an old range as featured in the video (as far as I am aware). I had never heard of tammying, which looks like a lot of hard work, I thought using a sieve was bad enough. But this is what the art of cookery is all about. Not just defrosting something and shoving it in the microwave. We have lost so much of the art of producing good food and so much is done for us anyway. Because of that, we lose the pride of achievement which comes from producing a good meal as well as the ability to produce food which tastes so much better than this package stuff. Wise Geek has an article on the tammy cloth. This is why Matt and I love to entertain, it allows us to stretch our cookery skills to produce really excellent meals which we generally don’t eat every day.

Talking of pre-prepared foods, made me think of mayonnaise. At one time I

would never think of doing anything else but making my own. Took a bit of effort, but the taste was worth it. Unfortunately in the UK, several generations have grown up being used to Heinz Salad Cream and have no idea what mayonnaise should taste like. However, I eventually discovered Hellman’s Mayonnaise which tastes just like I used

to make, so in common with many others, I said “why bother”. The same can be said for custard, in England we had Bird’s Custard Powder which practically everyone used. I then got a cook book called English Recipes and Others by Sheila Hutchins who used to write for the Daily Express and was its food editor. In it she has a recipe for custard which I decided to try, it was delicious, but it tasted just like Bird’s Custard. I actually have two books by Sheila Hutchins who only rates a very short entry in Google, they don’t seem to know much about her. The actual title of the book I mentioned is “English Recipes and Others from Scotland, Wales and Ireland as they appeared in Eighteenth and Nineteenth Century Cookery Books and now devised for modern use by Sheila Hutchins”.

That being said, I have obviously given in to some modern day conveniences like so many others of our time, but as a general rule, both Matt and I enjoy cooking and preparing all kinds of foods whether it be for simple daily fare or for dinner guests – usually at the weekend. I cannot believe it when I meet people who are unable to make a basic white sauce. Yes, it takes some trouble, but the end result tastes so much better. Its not that difficult either. I don’t even measure the 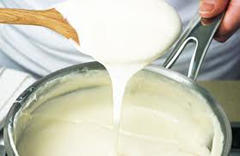 ingredients any more although I remember in my 20s phoning my mother from my London apartment (we had a communal phone, coin operated) and asking how to make a white sauce. Basically you take 2 tbs. butter, melt it in a pan, add 2 tbs. plain flour and allow the combination to cook for a while in order to let the flour cook. You then, and this is important, take the roux (as it is now called) off the heat and start adding milk very slowly, stirring well between each addition. If you don’t do this, it will become lumpy. You will need about 1 cup of milk. Once all the milk is incorporated, put the pan back on the heat and bring to a boil, stirring constantly, until it thickens. That’s all there is to it. This is the basic recipe; you can then add other things like cheese or whatever you need to make the sauce you require. This sauce will actually freeze pretty well; you can make a larger batch so you have some ready for another day. The proper combination of cooked butter and flour gives this sauce a taste that none of the quick methods ever achieve.

Matt says anyone who can read can cook, I don’t necessarily subscribe to this as I 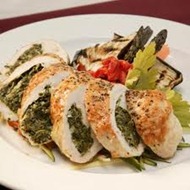 believe you have to have something of a feeling for food and to know what you are trying to make. Good cooks taste a lot whilst they are cooking. We used to go to a restaurant in England where they had a notice on display “Good Cooking Takes Time” and that is very true. These days, especially on the North American continent, people want their food fast and have no desire to linger over it and appreciate the flavours, visuals and aromas of what is before them. Such a pity, that way we lose one of the greatest joys in life, food. We all have to eat, why not learn to enjoy it to the fullest. I say visuals, by the way, as it is so important that the look of the food makes you want to eat it. Anything which is slapped on a plate or into a serving dish and not artfully presented might satisfy some people but never a gourmet.

The recipe below is a very good case in point, it is visually very appealing. Although there are some easy versions of an instant enchilada sauce included. 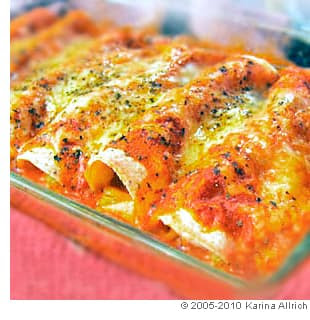 Sometimes I make these enchiladas with both a green salsa and a red sauce. For an extra dash of color, pour the red sauce down the center of the rolled tortillas in a wide strip and spoon the green salsa on both sides. Then I center a thin strip of shredded cheese down the middle, studded with sliced ripe (black) olives.

Make your Quickie Enchilada Sauce (recipe below) or if you're really in a hurry, stir together an instant sauce using one of the following:

* 16 oz. of your favorite red or green salsa

Heat the olive oil in a medium saucepan over medium heat and gently sauté the onion and spices for 5 minutes. Add the garlic, tomatoes, sugar, vinegar, and cilantro, stir and bring to a simmer. Cover and cook 15 to 20 minutes. Use as a sauce for enchiladas, burritos, or Mexican-style casseroles.

To make the baked enchiladas:
Spread about a spoonful (about 4 oz.) of the enchilada sauce in the bottom of the oiled baking dish. Heat each tortilla in a scant amount of hot light olive oil before you stuff it, till softened. Set the warm tortilla into the prepared baking dish and coat the tortilla. Spoon one-tenth of the chicken mixture into the center of the tortilla and roll it up into place, seam side down. Repeat for the remaining tortillas. Pour the enchilada sauce all over the tortillas and top with shredded cheese. Sprinkle with cilantro.
Bake at 350° for 20 minutes, until the cheese is melted, the sauce is bubbling, and the enchiladas are hot.
Serve with a crisp green salad, and offer salsa and fresh guacamole at the table.
Total Servings: 6