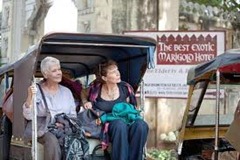 This evening, I am definitely going to see The Best Exotic Marigold Hotel. I am really looking forward to seeing it as I have now heard a number of people say how good it is. Particularly friends from England, it is, they tell me, very English in humour. I just hope the friend who is going with me will appreciate English humour. We can be difficult to understand, we tend to say funny things with straight faces and many times, other nationalities don’t realise we are joking.

Ottawa, one, a foot, was mailed to the Conservative Party headquarters and a hand was found at Canada Post Terminal. They are being sent for forensic examination, but what a peculiar thing to do, and how utterly gruesome. The foot was somewhat decomposed and so police are contacting funeral homes to see if any have lost body parts. Its peculiar because for a while unexplained feet were washing up on the west coast and as far as I am aware, that has never been solved either. Maybe there is a manic funeral director on the loose. Apparently the police now have a suspect Luka Rocco Magnotta, whom they think might have filmed the killing. A torso was discovered in Montreal prior to the mail delivery of the limbs.

Being extremely fond of all things Fabergé, I was delighted with the Google Doodle

yesterday celebrating Peter Carl Fabergé’s 166th birthday (hope he enjoyed it). We were lucky enough to see some of the eggs and several other items on display 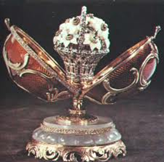 at Middleton Place in Charleston, SC, a few years ago. They used to have one egg permanently on loan there, the Spring Flowers

Egg, but this particular time, they had a lot more items loaned to them for display. They also sell copies which can be used as pendants, etc. – they are made by Fabergé but not of such precious metals and stones. I have two of them which I love. The picture here doesn’t really do justice to the egg. I have a poster which I was given in S.C. which is a much better picture of the item. This is a House of Fabergé photo. I just had to include the strawberries picture, I think it is so lovely, and so clever too. I wish I were financially in the market to buy such beautiful things. Of course many of the eggs were Easter gifts to or for the Russian royal family. I'm going to miss the Google Doodle tomorrow.

Some of you may remember, I sell Avon. Tonight someone paid me with one of 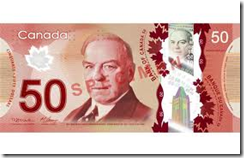 the new plastic $50 bills, to me, it doesn’t look like money at all. I was warned not to put it in the wash as they disintegrate. That is unlikely to happen, but why would plastic disintegrate I wonder. I have since done a bit of Googling and this is a link to an article about polymer money. http://tinyurl.com/brmmr36.

This recipe came from South Beach Diet and I thought it was rather unusual. I must confess I have never heard of chili-garlic sauce, but it seems to be something available in groceries. 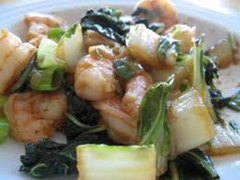 almost any dish. It can be used both for cooking and as a condiment when you want a little extra heat. Look for brands with no added sugar in the Asian section of most large supermarkets.

Instructions
In a large bowl, combine shrimp, scallion whites, and garlic. In a wok or a large nonstick skillet, heat oil over medium-high heat. Add shrimp mixture and cook, stirring occasionally, until shrimp turn pink and are cooked through, 3 to 4 minutes. Transfer to a large clean bowl.

Return the pan to medium-high heat. Add bok choy, cover, and cook, stirring occasionally, until crisp-tender, 3 to 4 minutes. Drain any liquid from the skillet and add bok choy to bowl with shrimp.

Return the pan to medium-high heat. Add soy sauce and chili-garlic sauce; stir to combine and bring to a boil. Add shrimp mixture and toss until coated. Cook briefly, just to reheat. Stir in scallion greens and serve warm.