You know, last week I was saying to Matt we soon wouldn’t have any more medical appointments. The Gods must have been laughing at me, yesterday we had to go to the family doc re prescriptions, this morning I have an echocardiogram, tomorrow Matt has his Kyphoplasty and then next week he has to go for a bone density scan. Please, no more, I am fed up with doctors’ visits. Enough already.

There is a new challenge going on at the moment called First Loves Blogfest, its supposed to happen on Mondays and I wasn’t really planning to take part, but I

was interested to read a few blogs on Monday morning and to discover their first love films were so, comparatively, recent. Which means, compared to yours truly, they are all so young. I started thinking about it and decided my first love film was The Song of Bernadette which was made in 1943 about the young peasant girl who had a vision in the city dump which eventually became Lourdes. We were taken to see this movie by the convent where I was currently being schooled;  I loved the movie and I think became star struck at the same time. When I saw this movie it was definitely in black and white, I wonder if they have now colourised it. Much to my surprise, you can find the film on YouTube http://youtu.be/Rpd7_6qg2Po I didn’t suppose it would be there. When I have more time, I will have to watch it again, it is, after all, a very long time ago since I saw it although I don’t think I saw it the year it was made, even I was a bit young then. Its funny, I remember scenes from the film after all these years, but I had no  memory of it taking place in the town dump. t band I ever loved was Benny Goodman’s, I went to see the Benny Goodman Story (I was playing Hookey from secretarial college) and I fell in love with the music and promptly bought all the records I could find, and they were the original vinyl records too. I have no idea what happened to all the records, but I still love the music. This is Sing, Sing, Sing from Bennie Goodman http://youtu.be/r2S1I_ien6A which they originally performed in Carnegie Hall. My favourite scene in the movie was when Bennie played classical music at a private concert and everyone expected him to fall flat on his face. This version is Sing, Sing, Sing from the movie which I watched many times, http://youtu.be/8icgO3Pgu8Q. I probably had lots of other favourite pieces of music prior to this, but I went really nutty on this music – I had previously never been interested in big bands, should have met Matt, he knows all about big bands, who plays what and when and in which band. 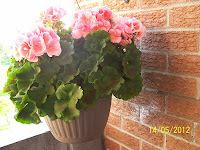 As for books, The Little White Horse by Elizabeth Goudge I read that book

countless times, I suppose it was one of my first experiences of fantasy. I have no idea what happened to my original copy, it was full of pictures which I had coloured as a child plus my name scribbled in the front together with a poem I wrote and put in all my books as a kid “This is Josie Duttson’s book, in it you’ve no right to look, what it cost you did not pay, so shut it up and go away”. My only problem is I hated being called Josie but it was the only version of my name that worked in the rhyme. Sadly, somewhere along the years I lost my first copy of the book and subsequently bought another copy; it just wasn’t the same and being an adult, I haven’t scribbled in it or otherwise made it my own. Its as a consequence of this being a much beloved book that salmon pink geraniums are my favourites. You’d have to read the story. They don’t really look salmon pink here do they? 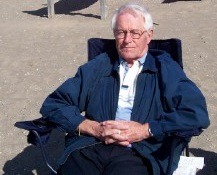 As for a first love, I didn’t have crushes at school, but I remember my first love as being a young man by the name of Peter who was quite a bit older than I. Don’t remember a lot about him today, but I do remember all the angst that went with my feelings of anxious love. I might have loved someone before him, but I really don’t remember doing so. I certainly had a few loves since, ending up with the love of my life with whom I have spent the last 40  years. I guess he had the sun in his eyes!

This is a pretty good way of serving asparagus. A lot of people don’t particularly want to do anything with their asparagus except eat it plain with lashings of butter, but when you want a change, there are lots of good recipes and this is one of them. 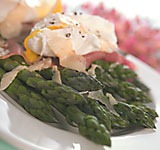 1. Preheat oven to 450º F (230º C). Steam or simmer asparagus just until tender-crisp, 3 to 5 minutes; drain well. Fill large skillet with water. Add vinegar and bring to simmer over medium heat. Slip eggs, one at a time, into simmering water; cook until whites are firm and yolks are just set. Remove eggs with slotted spoon and carefully blot dry with paper towel. (Eggs may be poached several hours in advance; transfer to bowl and cover with cold water. Drain well before proceeding.) Divide butter among 4 gratin dishes. Divide asparagus among dishes; drizzle with lemon juice. Drape proscuitto over top. Arrange 2 eggs on top of each prosciutto. Season with pepper to taste. Sprinkle cheese over top. Bake for 3 to 4 minutes or just until cheese melts. Serve immediately.

Email ThisBlogThis!Share to TwitterShare to FacebookShare to Pinterest
Labels: Asparagus in Bed, Benny Goodman Band, The Little White Horse, The Song of Bernadette