n a report from Kitchen Daily about the best tasting chocolate. In milk chocolate the pick was dove with Lindt which is supposed to be one of the best, coming in at #8 and Hershey’s at #10. Quite a few of the chocolates they mentioned I had never heard of. I didn’t bother with the dark chocolate as I prefer the milk kind. I don’t know how controlled a test this was, but its interesting that they chose Dove over some of the better known and more famous chocolates. I would like to have been on that panel!! 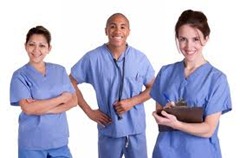 quiet day, not that Matt is ever that restful, he mainly carried on as though his surgery had never happened albeit being careful not to twist or bend. I too was somewhat tired after just hanging around in the hospital for most of the day. That has got to be one of the most boring things to do, hang around hospitals. OK I had my Kindle with me, but even that can get boring just sitting reading. Well, to me it can in the hospital. I did talk to a

few people during the day, other than staff I mean. Reminds me I have been having a discussion with a relation on Facebook who is a nurse and I was complaining about the lack of nursing uniforms. I personally cannot tell nursing staff from orderlies or housekeeping. She told me a colleague had recently been working in England and they still wear uniforms. I sure wish they would here. The only way I know a person is a nurse is when they shove a thermometer in your mouth, and for all I know it could be a housekeeper doing it LOL. Be fine if they all looked like the guys above, but they don’t. You get tops in all colours, most of them are housekeeping, but not all, I have seen a guy in what looked like scrubs (handsome devil by the way) whom I originally thought might be a doctor, mopping floors.

Apparently Canadian financiers are taking note of the amount of money spent in cross border shopping by Canadians going to the States to buy things. They are saying Canada’s revenues are decreased by $20 billion, someone else figures its more because of undeclared items. I don’t know what they can do about it, the majority of

things in the US cost a whole heck of a lot less than one pays in Canada. Unfortunately we personally don’t really live close enough to the border to make it worth our while to expend the effort and to drive so far, although many people locally do so. However, when we go on vacation we certainly stock up on a number of items which are so much more expensive at home. This picture shows someone with two TV; bearing in mind the craze for humungous TVs these days (why?) I guess the savings must be pretty good. Over the years we have bought a camera, a laptop and a scanner in the States, all of which were certainly a lot less than here. Hmmm, what am I going to have for my birthday this year? Another thing we stock up on is things like Vitamin D and other such pills, saves us a bundle. 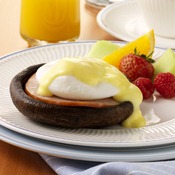 Eggs Benedict:
Turn oven to broil. Cook bacon in skillet and set aside. Brush mushrooms on both sides with oil and place gill side down on a large, broiler plate and cook for about 3 minutes. Turn the mushrooms gill side up; add bacon on each mushroom, place back in broiler for 2 minutes or until fully heated and crisp.

To serve, place mushroom on plate gill side up, pat with paper towel to remove moisture. Top with a poached egg and 2 tablespoons of hollandaise. Serve immediately.