Remember the box of Polish chocolates we were given? Well we opened them on 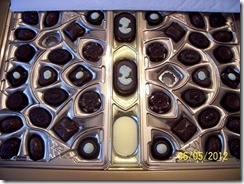 Sunday night, what beautiful looking chocolates. My only complaint is the guide is on the bottom of the box, very thoughtless, you have to hold the lid tightly in an effort to see what is available. They seem to be all cream filled with a variety of flavours, so far I have eaten a plum and an advokaat. I tried to 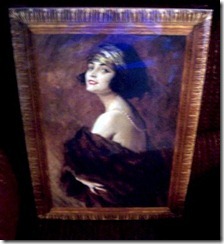 take a picture of them, I hope you can see how lovely they are. The three in the middle with the ladies head are advokaat, I should have taken a pic before I ate it LOL. If you remember, the outside of the box was lovely too. I love the painting, but don’t think I would bother to keep the box lid – now if I had the painting itself, that would be worth it. The picture is of Pola Negri who was a silent film star and made 63 films, many of them in Hollywood. I think she was quite lovely and was apparently irresistible to Charlie Chaplin and Rudolph Valentino. She didn’t die until 1987 at the age of 90. Sadly she appears to have faded into obscurity. I certainly had never heard of her.

Sunday night I watched Dirty Dancing on my laptop. Patrick Swayze was always a

favourite of mine. I have seen the movie before of course, but not for a long time. It really is a great movie, in my opinion, and I thoroughly enjoyed watching it. It made me feel a little sad that he was such a gorgeous young man and now he is no longer with us. Jerry Orbach, who played the father, is no longer with us either. I don’t watch Dancing with the Stars, but didn’t Jennifer Grey (Baby) take part recently?  Just looking it up, 1987, incredible it was so long ago. Funny, I watched Patrick Swayze just the other evening in Point Break. I also loved him in Ghost too. Although Whoopi Goldberg kinda stole the show in that movie. Road House was another of his that I liked.

Whilst picture taking, I took a couple of my African Violets. They are doing great guns at the moment. I nearly threw them out a while ago as nothing seemed to be happening after the original flowers died off, but now its blooming beautifully. 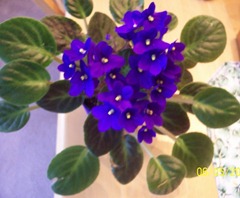 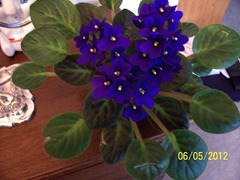 Why are men so stubborn? Matt finally went in to hospital yesterday – he should have gone a week ago. He fell on the base of his spine trying to help some other guy who had fallen and has been in major pain ever since. He has reluctantly taken a few Tylenol 3 here and there, but he doesn’t like to take them because of the side effects. I am worried about him having spinal stenosis the same as 7 years ago which necessitated a major op which took place in Hamilton which is quite a distance away. However, there are no neurosurgeons in our area. Having spent 12 hours in the emergency we finally were told that there was some compression on the spine and a fracture on one vertebrae lower down. He is now being sent to a back surgeon at the fracture clinic. The reason we were there so long was because they had to do a lot of CT scans today and there was only one radiologist. By the end of the day I personally ached all over, Matt wasn’t doing too badly LOL. Free medical is great in many ways, but it can mean a lot of waiting.

I mentioned yesterday that we had tried a new recipe on Saturday night. It was Gordon Ramsay’s version of Bois Boudrin sauce.  I have since discovered there are a number of recipes for this, but below is the one we used and it was delicious. I couldn’t find out where the name came from, Bois means wood so presumably it is Boudrin Wood, the nearest I could find to that was Bois Boudran or Château de Bois Boudran (both with an a) near Paris, where one can hunt. Doesn’t seem to have any connection to the recipe. There were a number of comments and one person said she had heated the sauce and it was just as good. There are others who have served this sauce over salmon and gammon, to name a couple of items. We have some left and think we might use it with pork chops. With the steak, you cook it to your desired doneness and then slice it. Pour the marinade over top and enjoy. Sunday we had it with pork tenderloin, it was equally good but I preferred it with the fillet steak. 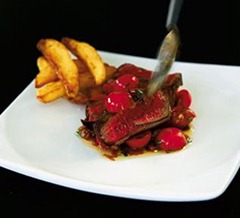 This marinade sauce, from Gordon Ramsay, is best spooned over a steak after cooking – especially a fillet steak.

Simply mix everything together. This can be done the day before, then kept covered in the fridge until required. Remove the sauce from the fridge at least 30 mins before serving.