In the news Monday morning, something like 240 tornados in the States, some of which took place in North Carolina which is not generally known for such

weather. Sam Champion, the weather man on GMA, was in Sanford, NC which was badly damaged. We had no idea where that was, so looked it up. It was well away from the coastal areas where we have friends. Not that I don’t heartily sympathise with the people of Sanford, but it is always good to know one’s friends are safe. They really have had some bad storms in the States this last few days causing several deaths. A Lowe’s store was blown to bits but the staff managed to save everyone by hustling them to the back of the store. Another woman was delighted to find her puppies which had recently been born, she has now named them, Tornado, Lucky and Miracle. The storm chasers must have been happy they had lots of places to do their experiments etc.

I have always been leery of dating companies, there seem to be more and more of them advertising on TV every day. This morning a woman came forward on GMA and described how she had a date with a registered sex offender and she was going public because she wanted dating companies to do more about background checks on their clients. I know or have met two or three couples who met through a dating service, but I think I personally would be very reluctant to pursue such a course if I happened to need a new date. Of course if you meet someone out and about the same thing could happen to you I suppose. I have always believed, and advocated to single friends, the best thing to do is to join a club or society which interests you, in my case it was amateur dramatics first and then scuba diving second, and there you will make friends and this can often lead to marriage with someone compatible. The idea of dating total strangers is not a course I would ever pursue. This morning’s story just confirms my reluctance.

By the way, when we left to go bowling yesterday, it was snowing, not much, but it was still snow not rain. Grrrr. We got a little Easter gift from one of our friends at bowling, he always produces little bags of Candies for both Easter and Hallowe’en. A nice idea.

Today I have to have a mammogram and then tonight Matt gets training on his job as a registration officer for the elections on May 2. I thought I would go along and he could come with me for my training session so that we are both capable of helping each other out.

risen to 3.3% the highest since before the recession. It is all powered by the rises in gasoline prices which continue to go higher every day it seems. Gas is still cheaper in the States, but it doesn’t bode well for our vacation in September. Obviously this is going to affect our shopping prices and I don’t suppose anyone is going to give pensioner’s a raise.

Back to WebMD for today’s recipe. The picture made me feel hungry and as this is a healthy food, I might well give it a go some day soon. Doesn’t that picture make you feel hungry? For your information, we often do cook the recipes I give here, I just don’t always remember to mention it.

Adapted from The Martha Stewart Living Cookbook – The Original Classics 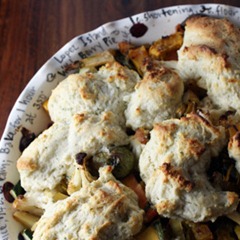 Preheat the oven to 425°F. Place squash, celeriac, carrots, cauliflower, Brussels sprouts, beet and parsnips in a roasting pan. Toss with 2 tablespoons olive oil; season with salt and pepper. Roast for 35 to 40 minutes, stirring twice during the cooking. Remove; reduce oven to 375°F.

Heat a medium skillet over medium heat. Add just enough olive oil to coat the bottom, then add the garlic and shallots; cook until soft, about 5 minutes. Raise the heat to high, and add the wine. Let the wine reduce by half, about 2 minutes. Add the vegetable stock and simmer over medium-high heat for 5 minutes. Set aside.

Combine 1 cup flour, the baking powder, 2 tsp. tarragon, and a sprinkling of salt in the bowl of a food processor. Pulse in the butter until mixture resembles coarse meal. Add the milk and Parmesan, process until combined, and set aside.

Transfer vegetables to a large bowl. Add zucchini and the remaining two tablespoons tarragon; toss to combine. Stir in the stock mixture; season with salt and pepper. Transfer to a shallow ovenproof glass pie dish; bake for 15 minutes. Remove from the oven and drop heaping tablespoons of the biscuit dough over the vegetables, leaving some of the vegetables exposed. Place the pie dish in the oven and bake until the biscuits are golden, about 25 minutes. Serve hot.