It was predicted, but I didn’t believe it, snow. Admittedly not much,  but still, snow!!!! We ended up having quite enough snow thank you, I know we started the winter with none, but we made up for it, WE DO NOT want any more; in the end it snowed on and off all day, but never did accumulate. Actually one of the worst snows we ever encountered was in April, Matt couldn’t get to work and I was stranded at my office. Matt went to the store to do our weekly shop, a 5 minute ride, it took him close on an hour to get home. Then the silly nut decided to come and get me even though I told him not to. What a hairy ride, the engine kept stopping and I was terrified we would have to abandon the car and try to walk. Luckily we finally made it home only to open the hood and discover the engine was totally snow packed, amazing it ran at all. The next day Matt and a friend went to dig out my car which was completely buried at the office parking lot. Some April. Then again, I always remember the first year we were in Canada, Easter was in April – as it is this year – and that weekend it was 80°F and I was out sunbathing in a bikini. Just no telling.

Today they were talking on TV about the royal honeymoon. One idea was Jordan were the Middleton family lived for a while. Bearing in mind all the unrest in the middle east, I 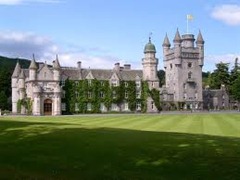 don’t think that would be a very good idea somehow. Maybe not as exciting, but I think they should stick to Balmoral. I have no doubt castles can get pretty boring when you live in them all the time, but it will be a lot safer. There are rumours that their first official trip after the wedding will be to Canada. Many Canadians are keeping their fingers crossed. 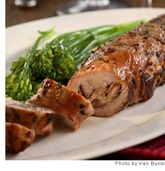 recipe which I posted on April 6th. It was very good. Only problem we didn’t turn the oven on soon enough so had to wait a bit to finish off the recipe. The instructions include very complicated ways of butterflying the pork tenderloin, we just cut ours almost in half, added the prosciutto and parmesan and then folded it back over, tying it with kitchen string. It was voted delicious by all of us. Before we had the pork we had Asparagus Pesto Toast, then we had Goat Cheese Potato Purée and Selma

’s Coleslaw with the pork and for dessert an Almond Rice Pudding which I got from my cookery group and which I love – as it turned out one of our guests was also particularly fond of rice pudding.

On Tuesday Passover begins. I have a very good friend in Philadelphia who celebrates this with her Jewish family. It seems to me she cooks for weeks  beforehand. Sunday I decided to send her an ecard and discovered charoset which has a dozen different ways of being spelt or pronounced as far as I can tell. According to what I first found out, one is supposed to eat a bitter herb and dip it in a charoset, in an article I was just reading, people make a matzoh sandwich including a very pungent horseradish and some charoset. To read more http://tinyurl.com/daatqp which will explain it and also give you a source of traditional and other charoset recipes. In simplistic terms, Passover is the time when Moses was trying to free his people (the Exodus) and a number of plagues were sent to the Egyptians. The final one was the death of the first born. The Jewish people were “passed over” because they had marked their doors with the blood of a spring lamb as instructed. Charoset itself has quite an interesting history and changes somewhat according to the branch of Jewish faith. 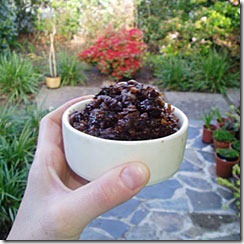 In addition to its traditional role on the Seder plate, this charoset is delicious as a condiment for duck or roast beef.

In small saucepan, combine port and figs. Set over high heat and bring to boil. Reduce heat and simmer, uncovered, until figs are softened and port is slightly reduced, about 15 minutes.