Thanks for small mercies. Yesterday Matt went to get our car CD player fixed. We thought we were in the middle of another high bill. In the end, it took 5 minutes and cost us nothing. Phew. Apparently CD

disc changers are no longer available in Canada – as I told you the other day – so I was planning to ship one from Amazon to the garage in NC which we always went to and to get it repaired in September. One thing we have always regretted about leaving NC was our access to Ingram Autos which was one of the best repair shops we have ever used. Not only that, the owner, Phil, was the most honest man we have ever met.

I mentioned having to vote in advance of the polls because we were working, I didn’t realise at first that the advanced polls are on Easter Weekend, starting Good Friday, that does surprise me. Friday, Saturday and Monday.

I have just finished a book by a new author called

Daniel Abraham, well new to me at least, the book is called The Dragon’s Path and is the beginning of a series called The Dagger and the Coin. I have no idea how many books will be in this series, but it looks as though it is going to be a pretty popular one. I enjoyed this book although at times I wasn’t too sure. However, now I am awaiting the next book which is called The King’s Blood. The book is full of different versions of the human species all of which were originally designed by the extinct dragon rulers of the world. There is also a religious sect who appear to want to “eat the world” according to an apostate. I am now back to my next Wheel of Time Book, Book 6, Lord of Chaos.

Ever since I started using WebMD to count calories, I have been getting some great recipes from them. There are many who won’t be interested because its lamb, but if I can get hold of some shoulder, it will be in my pot very soon.

This brothy stew is boldly flavored with a blend of characteristic Middle Eastern spices and finished with fresh spinach and fiber-rich chickpeas. Economical lamb shoulder tenderizes beautifully when leisurely cooked in a slow cooker. If you can’t find boneless shoulder stew meat, do not substitute more-expensive lamb leg—it tends to dry out during slow cooking. Instead, purchase lamb shoulder chops and debone them. Serve over bulgur and accompany with a salad. 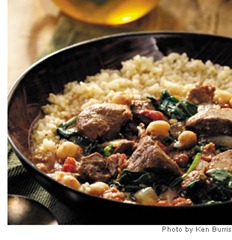 Yield: 8 servings, about 1 cup each

To Make Ahead: Prepare the stew, omitting the spinach, cover and refrigerate for up to 2 days or freeze for up to 4 months. Add spinach after the stew is reheated. Prep ahead: Trim lamb and coat with spice mixture. Chop onions. Combine broth, tomatoes and garlic. Refrigerate in separate covered containers for up to 1 day.