These days, on TV here,  one frequently sees ads for 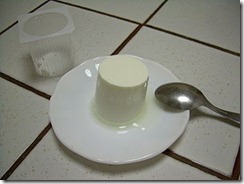 a cheese called The Laughing Cow. This takes me back to when I was 15, a loooong time ago; we used to have this cheese when I was on an exchange visit to France, obviously it was called La Vache Qui Rit there. Taken a long time to get here hasn’t it? We also used to eat Petit suisse which is an unripened, unsalted cheese. At the time I used to love it. No idea if I would today. Mind you I loved all the food which was served to me by the family I stayed with, except for the artichokes which, for some reason, I didn’t like in those days. Boy do I wish I could have those again today, they were particularly nice ones. Potages or soups were usually served for lunch and were absolutely fabulous. Breakfast was usually fresh baguette, bowls of coffee and lots of French butter and usually jam which Monsieur, at least, used to dip in his coffee bowl which then ended up with crumbs, butter and jam floating in it. Dinners of course varied greatly. I wonder if that’s where I became so enamoured of soup.

Incredible example of road rage on the news today. A woman didn’t pull away fast enough for another driver so he was tooting her, kept passing her and making gestures and then dropping back again, finally he fired at the back of her car. The bullet travelled through the car and through the car seat and her 4 yr. old got shot in the back. Luckily the bullet was somewhat spent by this time and the youngster is OK. I do so hope this driver is found and has the book thrown at him.

Another story I saw on TV yesterday, a 15 yr old German girl, Regina Mayer, wanted a pony and her parents said no. She then decided to train a cow to jump. There is a video on YouTube of the cow, Luna, doing just that. http://youtu.be/D4WtxKoal-c now here parents are saying she put so much work and effort into this they will buy her a pony.

How’s this for a nice healthy dessert dish. Not even too bad for diabetics, contains no gluten. High in potassium, fibre and calcium, low in sodium, what more could you want? 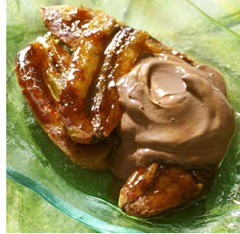 Bananas with yogurt sounds like a simple breakfast combination, but dress the bananas up with a little butter, rum and sugar, run them under the broiler and you've got a decadent dessert.

To Make Ahead: The yogurt can be drained overnight.