There are riots in Afghanistan due to the burning of the Qu’oran sparked off by a church in Florida where they did the burning in a fairly public display and which says it has no regrets. I really would like to go outside this church and burn a few bibles just to see how they feel about it. Talk about bigoted pigheadedness. They should be hanged, drawn and quartered for all the trouble they have caused. Burning the Qu’oran is, to the Muslims, like burning the Bible is to Christians. It makes me so angry that anyone would do such things and not regret it in the least. The report says 9 civilians were killed – so much for Christian morality. OK, maybe, as Obama said, the riots are a bit extreme, but even so, we know what the reaction of Muslims is likely to be so don’t provoke them with such an act of hostility.

I was talking about confidence tricks on Saturday - over the weekend I have had several emails telling me I have won all kinds of money, including the English Lottery, if I were foolish enough to follow these, they would lead me into major trouble. The three cons they pulled on people on the TV show Marketplace were to spill

green fluid behind a car and then go up and tell the driver it looked like brake fluid, persuading him/her to get out and take a look. His accomplice can then steal whatever is in the car whilst the drive is otherwise occupied. What they did was to put a sticker on the driving wheel which, funnily enough, people didn’t seem to notice. The second con was to stop people in the street for a survey telling them there was a prize of $1,000 to be won and people gave out all kinds of personal information a lot of which could be used to break passwords or steal identities. The third con was to knock on people’s doors, pretend to be a neighbour trying to get the area together for security reasons due to lots of local burglaries, they obtained all kinds of information this way too. In each case, afterwards, they told the ‘victims’ it was Marketplace doing it and people realised how they had been duped into giving away all kinds of information. It is, apparently, very easy to be conned however canny you think you are. In fact the people who say “you couldn’t con me” are the most easily caught they said. This http://tinyurl.com/3hnk5k4 leads you to the Marketplace site where they list other rip offs they have uncovered in recent months.

A report published this weekend says that Maple

Syrup is now thought to be a super food with all kinds of health benefits, even lowering sugars in the blood which really surprises me. http://tinyurl.com/3cvhkvg It is full of antioxidants which have anti cancer, anti inflammatory and anti diabetic properties. It has similar benefits to red wine, berries, tea and flaxseed. Who’d’a thunk it? I shall make sure to stock up. I have always avoided it, not completely you understand, because of what I considered its high sugar content. It has to be pure maple syrup though, not adulterated in any way. I have always enjoyed maple syrup candies which are like solid sugar and a lot of people find too sweet. I wonder if there are any recipes for asparagus and maple syrup with some red wine thrown in?

I came across an article, months ago, about colouring Easter Eggs which I saved to share prior to Easter this year, April 24th if you don’t remember.

Boil 2 quarts of water with one of the following fo 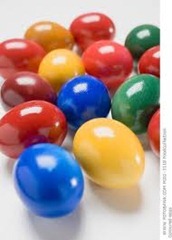 Add 2-4 tbsp white vinegar per quart to each batch of dyes a-c.
Cool dye to room temp.
Start with raw eggs. Before coloring, if desired, place a small flat flower, leaf or other natural form on one side of a raw white egg. Take a square of old nylon hosiery or cheesecloth and wrap it tightly around the egg so that the item is held firmly against the egg. Secure the cloth with a rubber band and trim
off the excess. Place eggs in cool dye. Bring to a full rolling boil.
Cover; remove from heat and let stand 25 minutes. Remove eggs from dye, rinse with cold water and remove cloth and flower if used. When eggs are dry, you can rub them with a light coat of salad oil to bring out the colors if you wish.