April Fool’s Day – at least that’s what we used to call it in England. As kids we delighted in thinking up some way to fool people – usually not as successfully as we thought. The people who were really good at it were the BBC programmers. Their programme about spaghetti trees, many years ago, was brilliant and I believe they have done many other such things since. 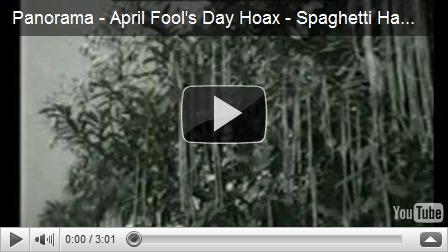 There were people who really believed spaghetti grew on trees at the time. very much like the Orson Welles’ broadcast of War of the Worlds in the 1938 which had people believing the US had really been attacked. If you want another good one, go check out GMail Motion. It’s funny. Just click on Google and you will find the link on their page.


I just read that Prince William will not be wearing a wedding ring. I wonder why not? In his case, everyone in the world will know his marital status anyway, not as if he could kid anyone is it? I have just read an article which talked about Welsh gold being used for royal wedding rings, I had never heard that there was such a thing – it has been a family tradition for 90 years but the gold is now very scarce although the British Royal Legion gave the queen a nugget some years ago which is what is being added to royal wedding rings these days.

Couple of news stories this morning, one about a woman who can no longer close her eyes. A result of a plastic surgery which went wrong, she cannot blink properly, she has to wear a protective shield over her eyes at night and put a gel in her eyes when she showers. Some people say its her own fault because of her vanity in having so much plastic surgery, but it seems a rather harsh punishment. It is possible to correct the problem, but it may well cause her disfigurement. A warning to those pursuing plastic surgery I guess.

The second story was about face mates. There is a new theory that the person who looks like you is likely to be a good marital match. They showed lots of face comparisons, one interesting one was George Stephanopoulos and Jackie Onassis. There are some similarities, around the eyes, between Prince William and Katherine. They are using a face matching technology – Matt and I don’t look a bit alike – we don’t think – and I can’t see any likenesses in the two or three couples we know who have been married a long time. Maybe the technology can spot things I can’t. There is now a dating site called FaceMates I believe.

It turns out there are new studies on the benefits of coffee. To quote Eating Well “drinking coffee regularly can help protect your heart and liver, reduce your risk of dementia, Alzheimer’s, Parkinson’s disease and diabetes, and may even relieve your headache. For those of us who love the rich taste of coffee, those benefits are just one more reason to keep on drinking.” However, before you up your present coffee intake, you should read this article on the cons of coffee drinking too. http://tinyurl.com/3jptgkc 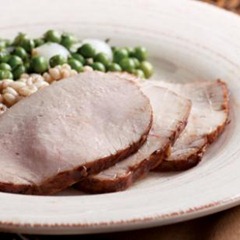 A little espresso gives a robust edge to the sweet-tart apricot glaze for this roasted pork loin. There is a 20-minute cooking range for the pork because its thickness can vary—check your roast at the earlier range of timing to make sure you don’t overcook it. Recipe by Joyce Hendley for EatingWell.