If it ain’t one thing, its another. I had to stop bowling yesterday because my back was hurting. Maybe it was because I hadn’t done much for two weeks and then bowled on Friday. Before I stopped I won my money back in the 50/50 draw, I had to bowl for a head pin and got it. Funny we have been pretty luck on the 50/50 lately, I have won it a couple of times and so has Matt. Makes for inexpensive bowling.

Just for a change, there was damn all on TV last night, so I decided to pull out a video which was made from a bunch of 8 mm film taken years ago. Unfortunately it chops and changes because I was unable to specify dates. There is a lot of film of Malta which I visited in the ‘60s with my first 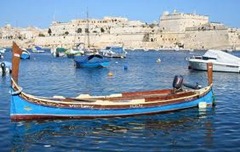 husband and friends, and then later when my parents lived there for a few years. It was great looking at the places we went to and the one of the pools we swam in a lot of the time. I was fascinated, in those days I wore the prettiest bathing caps, wonder where I got them? My three cousins didn’t bother and nor did my mother. I wonder why I did? We had some wonderful times in Malta and I really loved the island, I remember much of it fondly – oddly enough it was the first place I ever ate gazpacho although that is not a Maltese soup. The first time we visited we stayed in a hotel in Sliema and the food was pretty god awful, British cooking at its worst. There were not many decent places to eat, but eventually they built a Sheraton there which had a good restaurant – hence the gazpacho. Later a lot more decent eating places were opened because for a while there was a large influx of British retirees until a new Prime Minister was elected who didn’t like the Brits so they all left. Must have been a blow to the island’s economy for a while.

There was also film of my first wedding in 1962, almost 50 years ago, incredible that it is still viewable. I didn’t remember that one of my ex boyfriends was at the wedding, he was married by then mind you. It was wonderful to see so many pictures of old friends and relatives, many, if not most, of whom are no longer with us including my first husband although he died after we were divorced. There were pictures of our honeymoon trip to Devon in the south west of England. We stayed 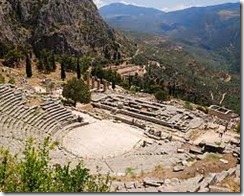 at, or near, Beer. We thought it was an odd name too. There are many films from trips on my parent’s boat with us in – what was then – Yugoslavia and Greece. Particularly visits to Dubrovnick (Yugoslavia) and Delphi (Greece) in those two countries. It all brought back some wonderful memories. Both countries are very mountainous and the views are spectacular, especially from the Greek ruins. Above is the theatre at Delphi with the temple ruins in the background. You can sit at the top of the theatre seats and hear someone talk quietly from centre stage. I know, we tried it. Brilliant acoustics.

I have decided to go with my ISP’s new phone system for seniors. I have mentioned before that technology and Matt don’t gel very well; he has one heck of a job with our present cell phone. The new cell phone which is on its way is supposed to be so very much easier and not only that, it has a one touch button on the outside for an emergency number. The package has 100 minutes which we will never use, we only carry it for emergencies and the emergency button will be a great feature to have. I have discovered that our old phone will still work for a) calling 911 and b) taking pictures, which is good. I could have bad both phones working with a different line for each, but that would have been an extra expense we don’t need. It not as though we are out and about all over the place without one another.

Here’s a recipe for a one dish meal. It seems typically American to me and I suspect it will appeal to several readers. I see it is even described as diner food.

This is a one-skillet meal, reminiscent of diner fare at roadside restaurants across the U.S. It can be made with either leftover or raw potatoes. Even while making dinner in a hurry, don't rush this dish: you want to cook the potato cubes until they are crispy outside but still creamy inside.
INGREDIENTS 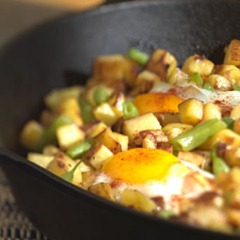 If using fresh green beans, cook in a large saucepan of boiling water until crisp-tender, about 3 minutes. Drain and refresh under cold running water.

Heat oil in a large nonstick or cast-iron skillet over medium heat until hot enough to sizzle a piece of potato. Spread potatoes in an even layer and cook, turning every few minutes with a wide spatula, until tender and browned, 15 to 20 minutes for raw potatoes, 10 to 12 minutes for cooked. Stir in the green beans, garlic, crushed red pepper, salt and pepper.

Crack each egg into a small bowl and slip them one at a time into the pan on top of the vegetables, spacing evenly. Cover and cook over medium heat until the whites are set and the yolks are cooked to your taste, 3 to 5 minutes. Sprinkle the eggs with paprika, if desired, and serve immediately.