The Gulf and its Seafood,

President Obama is spending his holidays on the Gulf Coast and there are pictures of him swimming there. The message being ‘come back to the Gulf for your vacation, all is well’ – is it? Maybe for vacationers: they have now cleaned up the beaches and the local waters, but from films I have seen, over the past few months, there is probably still oil suspended in the waters of the gulf and there is certainly lots of it on the seabed. What that is doing to the local ecology I dread to think. Fishing is also taking place there and I am sorry, but personally I wouldn’t want to eat it – at least not yet awhile. According to reports, tourism is badly down and the local businesses are losing money which is why the President is there.

This morning There was a report on Good Morning America who sent their own people down to investigate the health of the seafood in the Gulf. They sent samples of their catches to a Texas laboratory for testing and the upshot was “no contamination was present” which is what the FDA is saying. However, even the fishermen were doubtful about the seafood  they were catching. There is a video here http://tinyurl.com/25jsma4 from today’s programme. The trouble is, shrimp, crabs and oysters are all on the bottom which is where the oil has settled and eating the oil could, over time, cause cancer in humans. However, THE WORD is that it is safe to eat this seafood.

What concerns me in particular, when we go to North Carolina for our vacation next month, and want to eat seafood, you cannot always guarantee where this seafood, especially the shrimp, has originated. The restaurants, I have discovered, do not buy raw shrimp and shell them – too expensive for them – so they buy pre-prepared shrimp which could come from anywhere. I wonder, I have never checked, whether the same applies to the flounder one eats in local restaurants there. I think I had better stick to buying my seafood from a fisherman and cooking it myself. Maybe I am over reacting, as I said, the FDA (Food and Drug Administration) say the seafood is safe.

After all that, obviously we need a shrimp recipe. 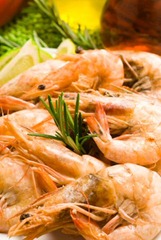 Dressing
1. Combine everything in large mixing bowl or blender and mix until combined.
Salad
2. Bring a large pot of water to a boil. Add asparagus and boil 2 minutes, until bright green. Drain and chop asparagus.
3. Place asparagus, shrimp, lemon, and prepared dressing in medium mixing bowl. Toss to combine and refrigerate.
4. Meanwhile, combine red pepper, green onion, and parsley in small mixing bowl.
5. To serve, drain shrimp mixture and arrange on plate with lettuce and cheese. Serve with bell pepper mixture atop shrimp and asparagus.