I was so pleased when I checked my bank online on Saturday, some money I was gypped out of was refunded to me. I ordered a sample of acai berries from an American source. They never arrived. A couple of weeks later I was charged some $90 odd for them. When I complained they said I had had several weeks to decide if I wanted them. When I said I hadn’t even received them they said it wasn’t their faults that the mail hadn’t arrived. Eventually they agreed if I did get them I could return them for a 50% restocking fee. I was not happy. I ended up calling Visa and telling them all about it and they said they would do something but that it would take a few weeks. It appears they were successful and I now have a credit in my Visa account. Whoopee, thanks Visa. However, be warned, don’t order a sample of acai berries, you will be stung.

Sunday morning we heard about the Indonesian volcano which erupted in Sumatra for the first time in 400 years. Just shows you, those damned things are never dead whatever people say. Lots of people have had to flee their homes. Of course I never could understand people building close to a volcano anyway, no matter how long apparently extinct.

There was an article in Saturday’s paper, The 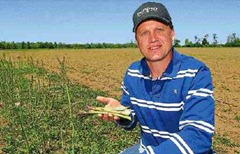 Record, about my favourite asparagus farmer, Tim Barrie, and his wish to rent one of his fields (which has to lie fallow for 20 years) to Arise Technology for the installation of solar energy panels to provide power for the local area. http://tinyurl.com/2fess6p Tim has been working on this for a couple of years and it is taking all this time for the local authorities to make up their minds. I can’t see what their problem is personally.

On Saturday night I watched the movie Lawrence with Peter O'Toole playing the part of Lawrence of Arabia. It is one of my favourite movies although it does go back a long way. I don't know how many times I have seen this movie, but I had never noticed before, there is an Intermission which then says "Enter'r act" errr, its "entr'acte". I had a bit of a giggle about it, I wonder why I didn't see it years ago. Pretty dumb of me.

Guess what, bowling season starts today. I have really missed it. Only trouble is we will miss three weeks as next week is Labour Day, and then we are in North Carolina for a couple of weeks. We will likely do some 10-pin bowling down there, but we are not very good at that. 5-pin is our scene. Because we are away at the beginning of the season, we will probably miss out on the hi-lo doubles tournaments again, pity because I won a couple of rounds a couple of years ago.

I made this soup on Saturday morning and we had some for lunch. It was very good. I’ve never heard of a Turkish or California bay leaf. I used the bay leaves I have. I didn’t have any chorizo either so I used a garlic sausage that we buy all the time. I also used 2 cups of broth and a little less water. 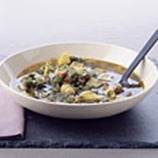 1. Cook onion, garlic, bay leaf, salt, and pepper in oil in a wide 4- to 6-quart heavy pot over moderate heat, stirring frequently, until onion and garlic are softened and beginning to brown, 5 to 7 minutes. Add potato, kale, broth, and water and cook, partially covered, until potatoes are tender, 15 to 20 minutes. Reduce heat to low, then add chickpeas and chorizo and gently simmer, uncovered, 3 minutes. Discard bay leaf and season with salt and pepper.