From Haiti to Moscow.

There was a report on Good Morning America about a hip hop artist, Wyclef Jean, who lives in America, but is Haitian by birth, now wanting to run for President of Haiti. Sean Penn, who has been living and working in Haiti since the devastating earthquake a year ago has said, in so many words, you’ve got to be kidding. For a video clip go to http://tinyurl.com/36dv6no. I know nothing about Wyclef Jean but hopefully he would be a better President than some of their previous incumbents who have been known for their blatant dishonesty and nest feathering. The Duvalier family spring to mind. In fact many years ago Papa Doc Duvalier was featured in a an occult novel by Dennis Wheatley, an English author, which I read a very very long time ago.

Moscow is choking at the moment, having had a super hot and super dry summer so far, they are suffering from the dense smoke caused by wildfires, some 480,000 acres have been burnt or are still burning and Russia is ill equipped to deal with it. All the residents in Moscow are walking around with masks on and the capital looks as thought it is shrouded in thick fog which is, in fact smoke. If you follow the same link above, you can see a video clip.

I actually posted this recipe about a year ago, but having eaten it for supper last night, I enjoyed it so much I thought I would share it with you again. Tonight we are trying another new chicken recipe. 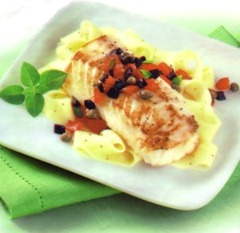 1. In a bowl combine tomatoes, basil, capers, black olives, oil, vinegar and half the oregano. Stir, cover and refrigerate until needed. Heat canola in a non-stick skillet over medium-high heat. Rub oregano on both sides of the Haddock loins and season with salt and pepper. Pan sear Haddock in heated pan for three minutes. Flip and cook other side for same amount of time or until fish is opaque or begins to flake. Transfer fish onto a plate and spoon Salsa on top. Serve over cooked pasta tossed in olive oil and oregano.