I haven’t mentioned any of the current disasters lately, there just see to be so many of them. In particular the flooding in Pakistan, what devastation, seeing all these poor people wading through water which is waist high and sometimes higher. I haven’t heard anything mentioned about the animals, I don’t know what has happened to them, particularly the cows which wander all over the place. I’m not quite sure if the holiness of cows as in India is the same in Pakistan, but they certainly have other animals which will have been affected by this flooding. matt saw a newspaper picture of a farmer wading neck deep in water with his cows swimming alongside him. Then of course the mud slides in China which are pretty terrible, I can’t imagine which is worse, mud or water, I think you maybe have more chance in water so long as it isn’t too violent. I don’t want to try either, thank you. Of course there are forest fires all over the place, the Muscovites are having a hard time of it, and now they are talking about the fires spreading to the Chernoble area and disturbing the irradiated ground in that area; a lot of people living in the Western States have lost their homes due to fires, doesn’t seem to be any end to it at the moment. Just to add to everything else, there is a tropical storm brewing in the Gulf of Mexico so they are going to have to abandon the work on the wellhead for a while. Then reports of more flooding in the States this morning.

On top of everything else, there are the more usual problems of heat and tornadoes in the Central States, the Eastern States are expecting a bit of cooling for the next few days, I am sure they will appreciate that. North Carolina, where we are heading next month, is suffering from high temps in the 100°F range.

The superbug (NDM1) I mentioned yesterday is causing a lot of problems and medical people are apparently working round the clock to find something to defeat it - http://tinyurl.com/3x475of – sounds a pretty scary bug to me when there is nothing out there to stop it. It has apparently started in India and Pakistan in 2008 and has already been found in Canada and many other parts of the world. 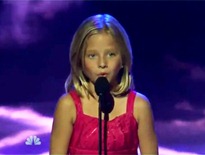 Jackie Evancho is the new and up and coming superstar – see this article with a video -http://tinyurl.com/26hg6ml – if her voice doesn’t send chills up and down your spine I will be very surprised. She is 10 years old and has the mature voice of a 30 yr. old. Absolutely incredible. She appeared on America’s Got Talent after submitting a YouTube clip. The winner of the show will receive $1 million. She already has a date at Carnegie Hall on December 2. Her voice is fantastic and just listening to this clip through my old PC speakers, I was in tears. She is a very mature young lady altogether.

We have a margarine in Canada called Becel, a very healthy product full of Omega 3 etc. I get a newsletter from them too. Here is a dessert from their latest issue which sounds great for the summer.