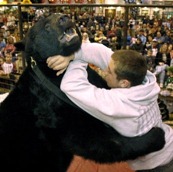 A report I saw on TV this morning was about a man  being killed by a bear to whom he gave care. It actually seems somewhat sad that the victim loved the bear and had been caring for it for a while. Nobody actually knows what provoked the bear to attack on Thursday – to read the story go here http://tinyurl.com/28m6vje – I’m not sure why people keep such animals on their own properties although I have heard them defend themselves by stating they have less accidents and escapes than do regular zoos. This particular back yard zoo used to allow people to wrestle one of the bears.

There is an ad running on TV at the moment which is for outdoor clothes and gear, their theme song is an oldie which used to be sung by Burl Ives, Big Rock Candy Mountain. the only part of it I know is that last line. I need to learn the rest so Matt won’t laugh at me when I sing out ‘big rock candy mountain’. This is a YouTube version of Burl Ives singing it http://tinyurl.com/39n6hyb and its not quite the same words as they are using for the ad.

The recall of eggs in the States has expanded considerably with 2,000 people having  been made sick. Figures of 228 million eggs have been quoted and they say some of the illnesses may not even have been reported. The advice – cook those eggs all the way through, just in case. Salmonella can just make you feel ill, or it can kill you.

Yet another of my regular emails is Living Well and yesterday they had this very interesting looking dessert. 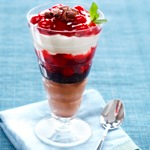 Chop 9 squares of the chocolate, reserving 1 square chopped for garnish

Pour the melted chocolate mixture into this cream cheese mixture. Combine thoroughly and set aside.

Whip the whipping cream separately until stiff peaks form and then fold into the cream cheese mixture and set aside.