Something I haven’t talked about this week, is the Canadian woman who pretended she had terminal cancer in order to raise money from her friends and later from strangers on Facebook. Her father is absolutely disgusted with her and was instrumental in getting her to turn herself in. She shaved off her hair and plucked her eyebrows so she would look as though she was going through chemo and I have heard rumours she raised as much as $20,000 – all of which has disappeared of course. She says she did it because she wanted to be noticed not just a nondescript person. She has certainly achieved that ambition. Her friends are very upset. Her mother was called all kinds of names because she asked her for money to pay for chemo and her mother pointed out that chemo is free in Ontario.

I love it when people invent new words. The first person I knew of who did so was Lewis Carroll whose famous invention of chortle comes to mind. Then Joe Barkson of World Wide Recipes invented the word franticulate describing, in particular, a dog jumping up and down in excitement. Now Karen Miller ( Karen’s Musings, see link this page) has invented puffuppery (not being puffed up in your own esteem). Lovely words – wish I had come up with something like that!!

Just caught a headline mentioning a superbug, will have to look into that.

Gotta go this morning, have an appointment early with my foot nurse.

Periodically I get an emailed recipe from my local fish shop T & J’s Seafood. This one sounded good to me and one I think we might try in the not too distant future. Maybe even in NC where scallops are pretty plentiful. The picture shows a scallop as we buy them in England, not over here. For some reason in North America the pink bit is removed, pity, its delicious. 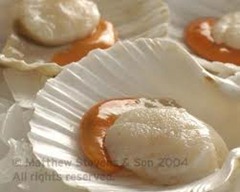 Coat the grill rack with nonstick cooking spray before starting the grill. Grill scallops, uncovered, over high heat for 2 minutes on each side or until the scallops are firm and opaque. Arrange mushrooms on a 9-in. square piece of heavy-duty foil coated with nonstick cooking spray. Grill mushrooms on foil, uncovered, over medium heat for 10 minutes or until tender, stirring often