The longest tennis match in history finally finished up with John Isner beating Nicolas Mahut 70-68. The match took 11 hours and 5 minutes. Sadly, we couldn’t find it on TV yesterday; we would love to have seen the finish. Here is a picture from Voice of America 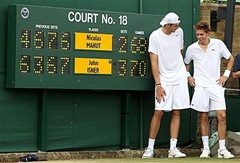 showing the pair of them beside the final score board. Isner from the US is the taller of the two. Mahut is from France. He sure has nothing to be ashamed of, it was a stupendous exhibition of skill and stamina. Oh if only!!!! I cannot imagine how the pair of them felt, especially on Wednesday when they had been playing for so long.

I mentioned HST or Harmony Sales Tax before, today we got a notice of just what is going to happen. There are two items which will affect us personally, one being gasoline which is going from a 5% tax to 13% and the other is ISP services – same increase. Maybe I can’t afford to write blogs any more!!! Home heating is also going up which may mean a rent increase. I’ve been saying I don’t care because we have to pay it anyway, but of course I do care that it is going to make a bigger hole in our not very deep pockets.

There was mention on the news about how much money BP had already spent on the Gulf disaster which made their stocks plummet again. They still haven’t stopped the leak though. In fact I understand the cap they are presently using shifted the other day and allowed the leak to flow fully for a few hours until they got it in place again. I saw a video the other day of a youngster with a proposal on dealing with the leak. His idea is that a robot should undo a few nuts and then insert an iron plate. His dad is an engineer and says its feasible. There was a video demonstration which I cannot find any more, showing him stop a water leak from a similar device to a well head. The family have informed BP of the idea but they have thousands of ideas being sent to them all the time.

I don’t actually follow soccer even at the level of the World Cup, however, there has been a bit of joking between Matt and a German friend as there is a match between our two birth countries on Sunday, not only that, there was a headline that the British PM and the German leader would avoid one another on Sunday at the G20 conference.

In yesterday’s World Wide Recipes written by Joe Barkson there was a Canadian Bacon recipe which appealed to me. I, in fact, only buy Canadian bacon which I sometimes eat for breakfast. It is the nearest thing to English back bacon although it isn’t quite the same, processing I imagine. Its so long since I have eaten back bacon in the UK that I don’t really remember the differences properly.

Heat the oil in a saucepan over moderate heat and stir in the flour. Cook until medium brown in color, stirring frequently. Stir in the beef stock, sherry, thyme, salt, and pepper and bring to a boil, stirring frequently. Meanwhile, broil the Canadian bacon
until lightly browned around the edges and heated through. Spoon the sauce over the meat and serve immediately. Serves 4 to 6.