Someone commented to me that my blogs give them an insight into life in this neck of the woods. Yesterday I was listening to the radio and heard the camp site report which I have never heard anywhere else before. They list each camping area and say how many serviced (i.e. with electricity, water and sometimes sewage) and unserviced (no facilities) there are available at the time of the report. I have only ever heard it on our local station, not on any other we listen to. However, quite recently there was a flash flood on a camp site which caused several people to lose their lives; I would think that would be a bit discouraging if you were thinking of going camping, especially in a tent. Even a camper/trailer could be pushed around by flood waters. I haven’t heard any report saying camping site usage is down though.

The news from the US today is full of the storm which could become Tropical Storm Alex and maybe even a hurricane and which may, or may not, cross the Yucatan Peninsular and head into the Gulf of Mexico. If it did go there, everyone involved with the oil spill would have to pack up and leave, and BP would have to lift the cap which they are using at the moment allowing the full gusher to pump away as long as the bad weather lasted. Er, its not fixed??? I thought it was. We are getting distressing pictures on the news of baby dolphins dying because of the oil, it is, of course, breeding time for them as well as lots of other species. In fact it has been posited that this disaster will destroy some species forever as they are only found in the Gulf of Mexico.

Also in the news today is Prince Harry’s visit to New York in order to discuss co-operation between the States and the UK regarding assistance to wounded veterans and their families. Its the first time I have ever heard that the Americans play polo, Harry is going to be playing a game with a US team. I remember going to polo matches as a kid and loving to watch and then stomp down the grass clumps between chukkas.

We have lots of protests taking place in Toronto this weekend – not so much against the G20 itself as the security measures being taken by the police to ensure the safety of all the world leaders. There is a big fence around the area of the city which is being used for the meeting and you’d better have a good reason and the right paperwork to approach this fence. I am surprised people are protesting all this. Its only for a few days for goodness sake.

Next week we have the Queen visiting us in Ontario, although I am not quite sure when. I don’t envy her the trip at her age although I am sure everything is done to make it easier for her. I know flying to and from England is pretty tiring which discourages us from making the trip. OK when you are young and the Queen has quite a few years on us.

I wrote about John Isner’s record breaking tennis match in Wimbledon, the next day he was beaten in just over an hour by another unseeded player. Sad really. I would guess he was pretty whacked after his marathon game which finished the day before.

A simple and refreshing salad from Crisco Canada this morning. 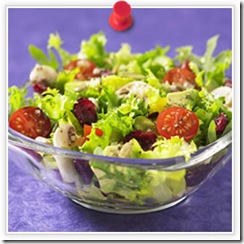 VINAIGRETTE:
1. Place all the ingredients in a jar. Cover and shake until combined. Store in the refrigerator for up to 1 week.
SALAD:
2. Place all salad ingredients in large bowl. Toss with desired amount of salad dressing. Serve immediately.

TIPS:
• Use vinaigrette as a marinade for salmon or halibut. Marinate fish for 10 minutes before baking.
• Replace the seeds with toasted nuts (almonds, pine nuts, etc)
• Swap lettuce for spinach and increase your daily intake of calcium, folic acid, vitamin K and iron. A great addition to any family meal.