Yesterday I was delighted to read, in my son-in-law's blog, The Scolopax Chronicles, that he has just won a prestigious award for his painting "Too Late". The Award is the BBC Wildlife Magazine Wildlife Artist of the Year, 2010. 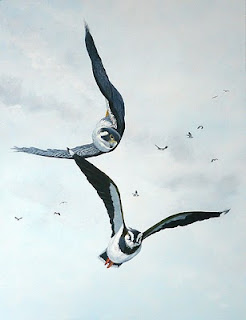 In case you are not familiar with BBC it is the British Broadcasting Corporation which is headquartered in London - at least I assume it still is. Actually we are very proud of both he and his daughter as she has just had her end of term report which was chock full of A's of one kind or another, a plain A being the lowest mark she had, with lots of A/A's and A* 's whatever they all mean, good I know that. She is attending the school I went to in my latter years of schooling although I was NOT a good student. She, thankfully, is. Should you want to know more about this painting, check out Mike's Wildlife site - link this page - where he tells the story of the action.

Being a Monday we went to our Summer League bowling, I guess the least said about that the better. We both bowled like people with no arms. Made it worse for me as one of the team members had two fantastic games. There were a lot of people not there yesterday, I have no idea where everyone disappeared to. Perhaps we will find out next week. Turns out we will not actually be bowling on the 21st but we have to bowl ahead or bank a game for that day. The alley will be full of school kids apparently so we are being kicked out!!! Needless to say, neither of us wanted to bank our scores from yesterday. The other day Matt went to see a neurologist who said there wasn't much wrong with him, however, hearing about his chronic back pain she gave him a referral to a physiotherapy outfit. Yesterday morning I checked on the charges and found they were a lot higher than we could handle regularly despite some assistance from our insurance. However, they have a separate entity which handles government assisted therapy so the upshot is Matt has gone for an appointment this morning, at 8 a.m. about an hour's drive (rush hour) away so I declined to accompany him. I am not good at getting ready to go out early although I have to do so on Wednesday for my regular blood tests for diabetes. I don't know what they will say when they assess him and whether physio will actually help him. I do hope so, yesterday in particular he was obviously in pretty severe pain. One of the joys of aging I guess. Whoever said golden years? The top story on Good Morning America seems to be about the suspected killer, Joran van der Sloot who was suspected in the killing of an American girl five years ago and who has now confessed to the killing of a Peruvian girl recently. He seems to be an arrogant little pr**k although they say he is now beginning to look a little scared. An interview was shown from several years ago and it made me want to slap him. If he is really guilty, and it seems so, I hope they throw the book at him.

I found another good recipe in my Vegetarian cookbook which I thought I would share with you. 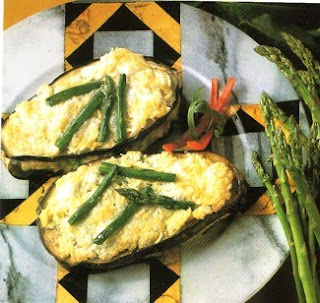 Preheat the oven to 350°F (160°C). Line an oven tray with foil. Brush with melted butter or oil. Cut each eggplant into 6 slices lengthways. Sprinkle with salt; set aside for 30 minutes. Rinse under cold water; drain. Pat dry with paper towels.

Place the eggplants on a cold grill tray. Brush with oil. Cook under medium-high heat for 5 minutes or until golden brown on each side. Drain on paper towels. Trim the woody ends from the asparagus (if necessary). Heat the butter in a medium pan. Add the onion and cook over medium high heat for 1 minute. Stir in the flour. Add the milk gradually to the pan, stirring until the mixture is smooth. Stir constantly over medium heat for 5 minutes or until the mixture boils and thickens; boil for another minute.

Add cheese, lemon juice, salt and pepper, yolk and chopped asparagus. Mix well and remove from the heat. Place 6 eggplant slices on the prepared tray. Spread the asparagus filling evenly over each eggplant slice. Top with the remaining eggplant slices.

To make Soufflée Topping; Using electric beaters, beat egg white in a small, clean bowl, until stiff peaks form. Spread egg white evenly over eggplant. Sprinkle with the cheese and decorate with remaining asparagus. Bake for 15 minutes until cheese is melted and topping set.
Have a great day