This morning, on Good Morning America, one of their guests was Dolly Parton. I have always liked her, she is a very clever woman apart from being a big singing star and making successful movies. She is celebrating 25 years of Dollywood which has turned out to be as successful as she predicted. She is also celebrating 44 years of marriage which in her world is pretty incredible. I had to look it up and she herself was 64 last January. She sure doesn’t look it. She sang a new song, Celebrate, in honour of the 25th anniversary of Dollywood, she also sang Jolene which is one of her all time favourites. There are three video links on the GMA website at HTTP://abcnews.go.com/GMA/

I now learn doctors have been giving cholesterol busting drugs to people without high cholesterol. Seems daft to me, but there is a study out which says they are probably not a good idea – the following URL from GMA shows an interview with Dr. Besser who talks about this latest study. http://tinyurl.com/2bzsjwu You can also contact the doctor on the GMA website and ask for information on reducing cholesterol without taking statins or similar drugs Our doctor says reducing cholesterol any other way is like walking somewhere instead of taking the car, you will get there eventually but its pretty slow.

Last night I watched a movie which used to be a great favourite of mine Desirée which was a romantic version of a story about Napoleon Bonaparte’s old love who eventually became Queen of Sweden having ended up marrying Field Marshal Jean Baptiste Bernadotte. The actors were Jean Simmons playing Desirée, Marlon Brando as Napoleon and Michael Rennie as Jean Baptiste. It is still a good movie to watch and still ranks as one of my favourites. Brando played Napoleon a couple of times I believe and always does a good job.

I have also now finished the remaining Deverry books by Katherine Kerr, The Shadow Isle and The Silver Mage both of which were excellent. I am now reading a collection of short stories called Irresistible Forces which are romantic sci fi stories. Included are stories by Lois McMaster Bujold set in her Miles Vorkosigan world and Catherine Asaro set in her Skolean Empire.

Whilst looking at the GMA website this morning, I came across the following recipe for depudged pigs in a blanket. I have a feeling that being “pigs” they should be pork but I suppose that is more fatty than beef.

De Pudged Pigs in a Blanket 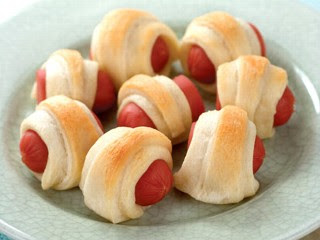 Cut each hot dog into 4 even pieces. Set aside.

Take one of the eight triangle-shaped portions of the dough and stretch or roll it out slightly, making it into a larger triangle.

Then, cut this piece of dough into four long, narrow triangles.

Beginning at the base of each of these triangles, roll one hot dog piece up in each until the point of the triangle wraps around the center. Place your blanketed pigs on a large, ungreased baking sheet. Repeat with remaining ingredients, so that you have 32 pigs in a blanket. Be sure to evenly space them, as the dough will expand while baking.

Place sheet in the oven, and cook for about 12 minutes, until dough appears slightly browned and crispy. Enjoy!