I was disgusted about all the riots taking place in Toronto this weekend – riots which ended up in major violence due to what is described as the Black Bloc. http://tinyurl.com/2aot3sc clicking on this link will take you to a series of riot pictures showing people dressed all in black with their faces hidden of course, they don’t want anyone to know who they are, later apparently they divested their black clothing and merged in with the crowd.. The whole thing made me ashamed to be Canadian there were other protesters who were at least peaceful until all this happened.

Yesterday I saw an ad for an ice cream maker and I have a friend in the States who has one. However, it made me think of when I was a kid. My mother used to make ice cream in freezer trays from the very small freezer section of the fridge. In those days the trays had removable dividers. It was delicious stuff. I have an idea she may have got the recipes from Mrs. Beeton’s Family Cookery, which I have. I must check it out although I don’t have that kind of freezer trays of course. I seem to recall one had to keep stirring it well to stop it crystalising too.

Sunday was the Germany-England match in South Africa. Germany won 4-1 although there was one goal which was incorrectly called which would have given England 2 goals, but they lost anyway. I lost $5 because of them LOL. Our German Canadian friend was over the moon because they had one. No, I didn’t watch. The only time I ever watched soccer was when Matt played many years ago. I was once taken to a big match in Birmingham, England, but who was playing I have no idea. I actually enjoyed the match but I never went to another. My uncle was a big fan, but we didn’t live close by and no-one else I knew was remotely interested until I met Matt. His two eldest grandsons are/were big soccer players. I say were as they are both working nowadays and may not have much time. Grandson #4 plays 5 aside. 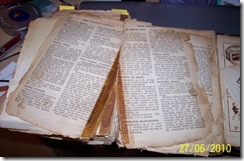 I looked through my old Mrs. Beeton cookery book (as shown in the picture) which was published in 1935. The book is, as you can see, a bit battered as it was well used by my mother who was a fantastic cook, in fact, I think she was a bit like the Julie in Julie and Julia and worked her way right through it over the years. I found that most of Mrs. Beeton’s recipes for ice creams start with a custard.  I have made a couple of alterations or added notes for non UK cooks. These recipes are more for interest than anything although if you like trying such things you might want to give it a go. I remember I loved my mother’s ice cream.

Bring the milk nearly to boiling point and pour it over the beaten egg yolks, stirring meanwhile. Return to the pan and stir by the side of the fire (on low heat) until the mixture thickens, but do not let it boil or the eggs may curdle. Stir in the sugar, strain and when cool add the cream. Makes about 1 3/4 pts. (Again the UK pint is 20 fl. oz.)

After this, you can proceed to make more or less any kind of ice cream you want by adding whatever flavours appeal to you. There are even some adding fruit jams or, me being a chocaholic, Chocolate Cream Ice.

4 oz. chocolate (I recommend best quality you can buy)

Prepare the custard as above. Dissolve the chocolate in the milk, sweeten to taste and strain it into the custard. Let the mixture cool, then add the stiffly whipped cream and freeze the usual way.

My note: Freeze the usual way means put in a container in the freezer, and periodically, whilst the mixture is freezing, whip it up so ice crystals don’t form, replacing it in the freezer each time until it is cold enough to be ice cream.