Last night I finished The Infinity Gate by Sarah Douglass. This was the final book in a trilogy called Dark Glass Mountain and was part of a series of ongoing tales by Sarah Douglass featuring the Icarii a race of people with wings. Reading the final paragraphs, she has left herself lots of room for at least one more trilogy. I enjoyed this latest one and will look forward to her next series. I now have another Catherine Asaro romance to read – these are a series of magical stories about a lost continent and I have been enjoying those too. This one is called The Misted Cliffs.

I had a good three games bowling yesterday, and Matt managed to bowl too although on Sunday he had thought he might not be able to. However, he saw his physio therapist again on Monday morning and whatever she did this time seems to have improved matters. He has yet another appointment this morning and I am going with him so we can join a friend for lunch afterwards. I loaned her some of my books which she has now finished. We are going to a place called Cafe 13 in Cambridge, I think I may have been there many years ago, but certainly not recently.

The last I heard from BP was that they were hoping to trap more oil, but whether they have had any success I don’t know. They are now running ads about a department set up specifically to deal with people who have claims for loss of income or other pertinent injuries against BP. A lot of fisherman are employed in clean up duties as are a lot of people on shore. Whether they are paid enough to compensate, I don’t know. This disaster just goes on and on and will continue to do so until they finally manage to stop the gushing oil, if they ever do.

I just heard on the news that the government of New York has averted closure by cutting yet more funding this time to social services and addiction clinics. Good job, first they hit the seniors who have no way of replenishing their income, and now social services – of course they already reduced funding to schools. However, I haven’t heard anything about proposed salary cuts for the inefficient government of New York.

Barrie Bros. sell a pesto which contains asparagus. There is nothing wrong with the pesto, it is delicious, but the asparagus is totally lost. I have been inventing a pesto in my head which I have yet to try out. We shall see, I haven't got long because asparagus season will soon be over.

Here is another asparagus recipe from the Ontario Asparagus Marketing Board. The picture is from Barrie's Farm. Now I have decided to like potato salad (well the one I made the other day) I thought I would try this one. 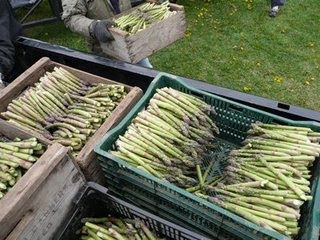