It didn't occur to me before, but I Googled Graceliners and got my blog first, I then found several other pages about them - have a look at the article here http://upbeat.net/ELVIS/ELVIS.HTM which shows them in white costumes as well as pictures of them as they really are. The one who owes me for hugging Matt is definitely there, and there is a phone number so maybe I should call them and ask for my money LOL. There seem to be articles about them and pictures on Flickr and YouTube. They are obviously pretty well known.

I don't often write about political things and please understand, I am not condoning what happened, but the world is up in arms about the death of the humanitarian aid people killed by the Israelis. I am not sure what the problem is, OK they were unarmed, but in a fight things tend to get out of hand. However, this is a BLOCKADE which means they don't want you to get through. Its just the same as sanctions levied against countries. There have been blockades since there have been navies and if you are going to try and run a blockade, you are going to get trouble. The British blockaded the French during the Napoleonic wars and did it again during the American wars; I only know about British blockades, but I am quite sure it has been done by other navies although admittedly at one time the British did have the most powerful navy in the world. There have been lots of romantic stories written about blockade runners (Rhett Butler in Gone with the Wind for one), but lets face it, if you try and run a blockade, there is likely to be shooting, whether you are armed or not. I am sorry people died last time; I see there is yet another ship, from Ireland, which has been stopped by the Israelis today. It is no use trying to run blockades and expecting nothing to happen. The answer here is to persuade Israel not to blockade Gaza. Not to try and force them. Force never achieves anything but more force which escalates into death and disaster. I don't care how humanitarian you are, blockade running is dangerous and an act of war and Israel is blockading Gaza because they don't want them helped. This is a war tactic and in war, people get killed. I am sure this is an unpopular point of view, but you have to be realistic about the whole thing. On the whole, I personally am against war of any kind, but if you involve yourself in one in any way, you can get hurt.

I phoned the bowling alley yesterday, the one where we bowled our tournament, it turned out that our team actually came fourth and were one point behind the third team. How about that. If only we would have got two more pins, we might have made it. The friend I call 'coach' who has taught me a lot about bowling, always says every pin counts, it sure does. The winners of the tournament get to go to a Province wide tournament to be held in Oshawa where we went a few weeks ago. It is a three day event apparently, I guess there are a lot of teams from all over the Province. I wonder if there is then a National tournament? Will have to try and find out. Not that it affects me, but you never know, we might get through one year. Reminds me, we watched the Spelling Bee for a while last night. There was an 11 yr old Canadian girl who got through to the finals, she did very well for her age. Unfortunately she was stumped by "confiserie" she was hearing col instead of con as Dr. Bailey was pronouncing it with a vaguely French intonation and she couldn't pick it up. Pity, because she knew the word apparently, but just couldn't recognise it last night. To me, some of the words seem incredibly easy, and others incredibly difficult. Gnocchi was one, which these days I would say a large proportion of people in North America are familiar with even if they have never actually eaten them. I have and don't much like them. It turns out that a 14 yr old Indian-American girl from Ohio, Anamika Veeramani won with "stromuhr" There is a video at GMA http://abcnews.go.com/gma if you would like to watch.

At the same address there is video about the latest on the oil spill in the Gulf of Mexico. It seems that BP have managed a slight success with their latest efforts and have captured some of the oil, but there is still much, much more gushing into the gulf. Their final answer seems to be two more wells tapping into the source, I am not sure how that is going to stop this one leaking at all, but I'm obviously no expert. However this plan isn't going to be achieved until late summer. What a mess.

I have The Essential Vegetarian Cookbook which for some reason, I don't use very much. Yesterday I noticed asparagus on the cover and thought aaaaah!! Sure enough there are some interesting recipes in there including one for an Asparagus Purée which can be used a a dip or a past sauce, a filling for crepes or omlettes or just on their own. 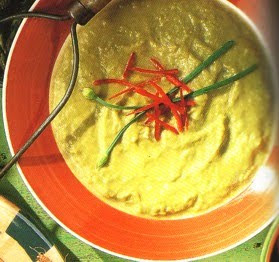 Heat 1 oz. butter and 1 Tbs oil in a pan, add 3 chopped spring (green) onions and 10 ounces of fresh young asparagus, chopped; cook for 3 minutes. Add 1/2 cup vegetable stock and 1/2 cup of cream, cover and simmer til tender. Remove the vegetables from the liquid and process until smooth. Bring liquid to a boil and reduce by one quarter. Return purée to pan, stir in 1 Tbs grated Parmesan cheese. Cook over medium heat for 5 minutes or until the pureée thickens slightly. Season with salt and pepper. If the asparagus is stringy, the purée should be passed through a sieve. (My note: If its stringy, the asparagus was not fresh enough). Have a great day