As I mentioned on Saturday, we had a dinner party that evening which turned out to be very enjoyable. With our pre-dinner drink I served Barrie Bros. asparagus flavoured tortilla chips and asparagus salsa which seemed to go down well. For a starter we had Paula Deen’s recipe for Asparagus Phyllo Bundles which I posted here recently. We then followed it with Chicken and Snow Peas with Peanut Sauce. I thought Matt did

an excellent job with the snow peas all around the dish which makes it look so attractive.

We accompanied with the Farm Fresh Potato Salad 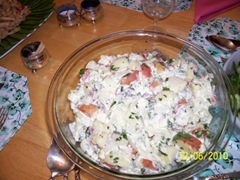 together with Pear, Cucumber and Pecan Salad as shown below. The recipe actually calls for walnuts but I chose pecans as I find walnuts over on this 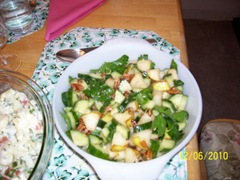 side of the pond to be somewhat bitter. I have posted both these recipes within the last week or so. As our guests went back for more of all these items they apparently found the salads as good as I did. I followed this with Strawberry Cloud which I forgot to take a picture of. But which is a light dessert made with Jello, Berries and Cool Whip. I have actually wondered about making it with real cream but that doesn’t ‘hold’ too well and I didn’t think it would work. With English cream it might be safer.

Most people know what I think about cream over here and Matt and I were holding forth about it last night. We were trying to describe the ice cream which can (or could) be found in Devon and Cornwall made of the local cream which is almost as yellow as custard.

The US fans are thrilled to bits with their draw on Saturday. They were playing England. Once upon a time England was one of the top soccer teams, but I don’t think they are these days. I gather the goalie let through one ball which he should have stopped with ease. Don’t watch myself but this is what has been said on the news. Vuvuzelas seem to have caught the imagination over here though, there have been lots of articles about them in the papers and on TV, so yes, to my friend in South Africa, I am afraid they probably will breed over here, just as my South African friend warned. Having just written that, I heard vuvuzelas blasting away on the radio, a whole bunch of them. We are doomed!!!

I am, to put it mildly, somewhat puzzled. Abby Sutherland, the 16 yr old who was 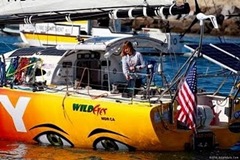 trying to sail round the world, has apparently abandoned her boat Wild Eyes in the middle of the ocean. I can’t understand why the French fishing boat didn’t try and tow her in for the salvage at least. I see there is now a movement on her blog page to help restore Wild Eyes to Abby. I certainly don’t understand why they would leave the boat out in the ocean to become a hazard to shipping apart from anything else. Nor do I understand why Abby having lived on board for so long allowed it to be abandoned in that way. Don’t think the insurance company will be very happy about it. OK, the mast was broken, but masts can be repaired. Been a bad weekend especially for the poor souls out camping who got caught in a flash flood where the river rose some 8 ft. I don't think they yet have the full total of deaths. What a terrible thing to be asleep at your camp site and suddenly you are woken by rushing water all around you, if you are woken at all.

Silly me, I thought it was Father's Day last weekend, but it appears I was wrong and so I have at least a week's more asparagus to avail myself of. Here is another recipe from AsparagusRecipes. Here again, I personally will probably change the walnuts to pecans.

½ cup of walnuts. ¼ cup of soy sauce. 1 tablespoon of sugar. 1 tablespoon of sake. 1 lb of asparagus. Crush the walnuts in a food processor, leaving small chunks. Add the soy sauce, sugar and sake and blend for 10 seconds, just until well combined. Trim and discard the woody bottom portions of the asparagus stalks, then cut them into 1 ½ inch pieces. Steam the asparagus for no longer than 2 minutes. Rinse the asparagus with cold water and drain. For each serving, arrange stems and tips in a mound, with tips aiming upward. Drizzle with the dressing. Serve. Have a great day