Oh dear, Top Kill failed. I am very distressed to hear this. They now have other plans in the works including drilling relief wells which won't happen til August, imagine just how much more oil will pump into the Gulf!! I hope and pray something is going to work soon because the Gulf of Mexico will soon be too badly damaged to repair and hundreds of people will have lost their livlihoods. What also distresses me is that there is talk of drilling in Arctic waters and they are already drilling in deep water off the Eastern coast of Canada. There is a video about the next plan of BP's to slice into the broken pipe and then cap it. The riskiest of all it is said. To see the video go to http://abcnews.go.com/gma
I mentioned having lost a load of data from my calendar programme. I have been working on and off with Carbonite which is the company which stores my backups, usually an excellent system, but for some reason this time, it has failed. I have managed to collect some information, but in some cases I don't even know what I have lost. I have been using this programme for at least 15 years and thought it was safely being backed up.
I am jus

t starting a book by an author I had never heard of. Glenda Larke (Tropic Temper this page) mentioned her and called her Celine (Moorhawke) Kiernan, Moorhawke being the last name of the character in the story. The book is called The Poison Throne and I am looking forward to reading more of it. It is book one of a trilogy. I am not sure if the second book is available here yet or not and I know book three is written although not yet published. Celine Kiernan has a blog site too. Glenda Larke has also been working on her third book in the Watergivers trilogy; this morning she writes that she has finished her second polishing and sent it to the publishers, etc. However, there is a lot more work to be dealt with between now and publication. She is bemoaning the fact that nothing else in her life is being dealt with. I am not surprised. Even I would begin to worry about the housework if I had had to ignore it so long.

I have been thinking about potato salad, which I generally do not enjoy, for a dinner party coming up and this one below doesn't look too bad. I actually prefer my potato salad to be very simple and in the UK when I did make them, I just added mayonnaise, onion and seasonings. I don't generally eat those salads which include all kinds of pickles and/or hard boiled eggs or lots of other stuff. There was a place in North Carolina where we could get a good potato salad but they don't exist any more sadly. The upshot of this is I think I might try this one. As for home made mayonnaise, since I discovered Hellman's tasted exactly the same as the home made mayonnaise I had been making for years, I have never bothered to make it. Hellman's is full of fresh ingredients not chock full of chemicals. Spike Mendelsohn was on GMA this morning basically making burgers which I found way too overloaded but one of the GMA hosts said she didn't eat potato salad but liked this one, 'nuf said. Spike Mendelsohn's Farm-Fresh Potato Salad From the Kitchen of Spike Mendelsohn

Servings: 4 Who doesn't love potato salad? If you raised your hand, we can't be friends. Here's a fresh, basic recipe that goes with any meal. You can make this one day ahead. Ingredients 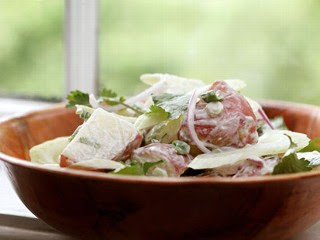 Meanwhile, in a large bowl, stir together the mayonnaise, vinegar, oil and mustard until well combined. Add the onion, celery, and garlic and mix until well combined. When the potatoes are cool enough to handle, cube them and add to the bowl. Add the thyme and parsley, season with salt and pepper and toss. Serve immediately.