Oil Leak, European Finance, Who is your Buyer? 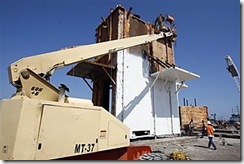 I find it very frustrating that I see all kinds of diagrams showing the proposed methods of controlling the oil leak in the Gulf of Mexico, but I can’t find one of these diagrams on the Internet. However, I have found the above picture which shows the metal box which BP are proposing to use to cap the leaks. The box is about 4 storeys high and weighs several tons. The article linked here http://abcnews.go.com/Business/wireStory?id=10558496 explains that it isn’t just the oil one can see, but there is a lot of a “tar” like substance which is at different levels in the gulf and causing problems to the bottom of the sea and to the plankton which are a major source of food in the oceans. I just hope this box works or that something does soon because the disaster is getting worse on a daily basis. Whilst BP is dithering, animals, birds and sea creatures are dying. People are losing, or have lost, their livelihood, the wetlands are about to be destroyed and there is a possibility the tidal streams will carry the oil up the east coast having the same effect there.

Then we have the economic situation in Greece accompanied by the riots. In a report this morning they said that Greece’s economic collapse could have a domino effect throughout Europe affecting what are known as the PIIGS (new one) this means Portugal, Ireland, Italy, Greece, Spain. As they are specifically talking about the Euro, I am not quite sure why the rest of Europe isn’t involved. France, for instance, also uses the Euro. This will affect the US markets because so much is sold to Europe. The oil crisis won’t help: a report this morning said China is ready to step in with clean energy solutions at any time. I know we personally are already feeling the economic effects with the British pound having fallen considerably. Maybe the fact that they don’t use the Euro will help, I am insufficiently genned up on world finance to talk about this with authority. I just know how it is affecting my pocket.

Horrid story this morning about a man trying to sell a diamond ring on Craig’s List – I’ve heard of this list but never visited the site – a couple came to his home ostensibly to look at the ring and ended by tying the family up and finally shot and killed the husband because he was trying to defend his family. They are advising people to be very careful selling online and not to let strangers into your home but to meet them in a more public place. Don’t give your phone number or your address online either.

I have mentioned before that one of my favourite TV chefs is Wolfgang Puck who has restaurants all over the States including the famous Spago’s in California. This was a recipe I saw him make the other day and I thought I would share. I think plain asparagus with a touch of melted butter  would make an excellent accompaniment to this dish. 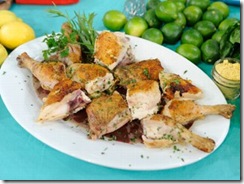 Meanwhile, butterfly the chicken. With poultry shears or a sharp knife, very carefully cut along the ribs on both sides of the backbone to remove it. Spread out the chicken, skin up, on a clean work surface and press down firmly with the heel of your hand to flatten the chicken.

Over high heat, preheat a heavy ovenproof skillet large enough to hold the flattened chicken. Add the olive oil and swirl it in the skillet. As soon as you begin to see slight wisps of smoke, carefully place the chicken skin side down in the skillet. Sear the chicken, undisturbed, while reducing the heat little by little to medium, until its skin has turned golden brown and crisp, 5 to 7 minutes. With tongs or a large fork, carefully turn the chicken skin side up.

Transfer the skillet to the oven and roast until the chicken is deep golden brown and the juices run clear when the thickest part of the thigh is pierced with a skewer, 10 to 15 minutes. When the chicken is done, transfer it to a carving board, and cover with aluminum foil to keep it warm.

Stir in the cream, bring the liquid back to a boil, and cook for about 3 minutes. Reduce the heat to low, stir in the Dijon and Meaux mustards, and adjust the seasonings to taste with salt and pepper.

With a heavy knife, cut the chicken into serving pieces. Return the chicken pieces to the skillet, spoon some of the sauce over them, and sprinkle with parsley and tarragon before serving.